Chinese drama mainly includes traditional opera and modern drama. Opera is an inherent traditional drama in China, while modern drama is a form of Western drama introduced in the 20th century. Here, Top Asia Tour will introduce Top 5 Classical Operas in China for you.

Chinese classical opera is an important part of the Chinese national culture. It has been loved by the people of all dynasties for its artistic performance. Moreover, it also occupies a unique position in the world of theater. Chinese classical opera, ancient Greek tragicomedy and Indian Sanskrit drama are called the world's three major ancient dramas. 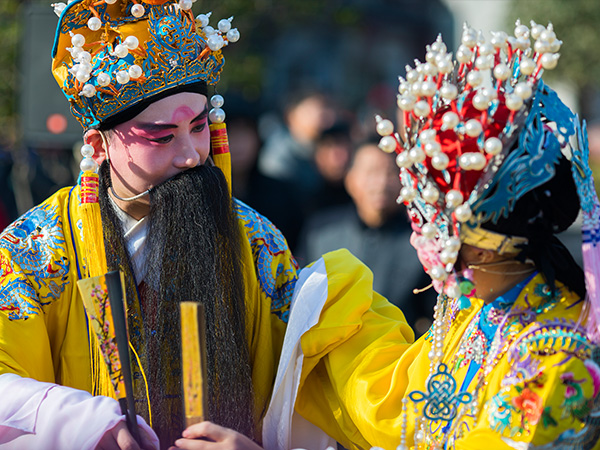 Chinese opera is mainly composed of three different art forms: folk song, talking and singing, and burlesque. It originated from primitive singing and dancing, and is a comprehensive stage art style with a long history. After the Han, Tang, Song and Jin dynasty, it has formed a relatively complete opera art.

Chinese opera is a synthesis of literature, music, dance, fine arts, martial arts, acrobatics, and performing arts. There are more than 360 types of Chinese operas. It is characterized by aggregating many art forms with one standard, and reflecting their respective personalities in the common nature.

The formation of opera can be traced back to the Qin and Han dynasties. But the formation process was quite long, and it was not formed until the Song and Yuan dynasties. The mature opera should start from the Yuan Zaju opera, and enter the modern era through the continuous development and maturity of the Ming and Qing Dynasties. It has been prosperous for more than 800 years, and now there are more than 360 opera types.

After a long period of development and evolution, the Chinese traditional opera with the five major opera types of "Peking Opera, Yue Opera, Huangmei Opera, Ping Opera, and Henan Opera" as the core has gradually formed.

Peking opera is the quintessence of China, and one of the most important types of operas popular throughout China. It has a history of more than 200 years, with Beijing as the center and all over the country. Peking opera was finally formed in the Qing Dynasty. 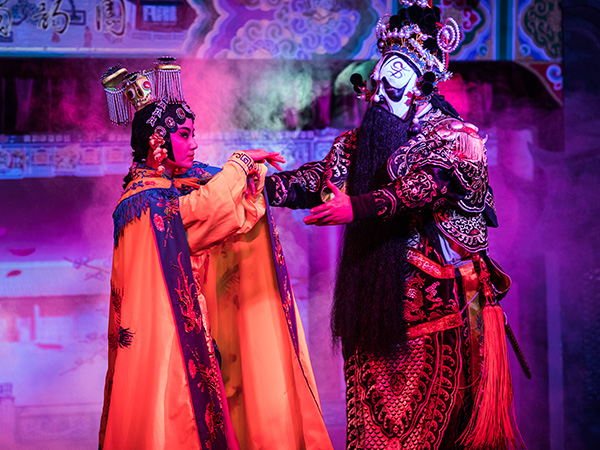 Peking opera has a set of standardized artistic expressions in various aspects such as literature, performance, music, and stage art. Peking opera accompaniment are divided into two categories: the literary field and the martial arts field. The literary field uses the Huqin as the main instrument, and the martial arts field uses the drum board as the main instrument. The roles of Peking Opera are divided into Sheng, Dan, Jing and Chou.

The main performance content of Peking Opera is historical stories. In 2010, Peking Opera was included in the UNESCO Intangible Cultural Heritage List. The representative operas are "Empty City Strategy", "Farewell My Concubine", "Taking Tiger Mountain by Strategy", "Drunken Concubine", and "Gathering of Heroes".

Yue Opera, or Shaoxing opera, is the second largest opera genre in China. It is also known as the second national opera, and the "most widely spread local opera". On May 20, 2006, Yue Opera was approved by the State Council to be included in the first batch of national intangible cultural heritage list. 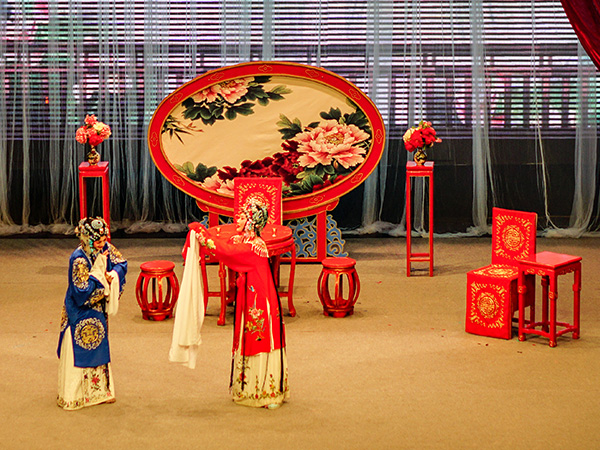 Shaoxing Opera originated in Shengzhou, Shaoxing, and developed and expanded in Hangzhou and Shanghai successively. It became popular throughout the country and spread throughout the world. In its development, it has absorbed the achievements of Kunqu Opera, Drama, Shao Opera and other characteristic operas, and has experienced a historical evolution from male Yue Opera to female Yue Opera.

Yue Opera has many classic repertoires, such as "Liang Shanbo and Zhu Yingtai", "Mistress Xiang Lin", "Romance of the Western Chamber", "Dream of Red Mansions" and so on. After the founding of the People’s Republic of China, a number of outstanding plays appeared in Yue Opera, such as "Five Daughters Offering Felicitation", "Han Palace Complaint", "Rouge", "Chunjiang Moon", "Tongjiang Rain", and "Tears of Candle". 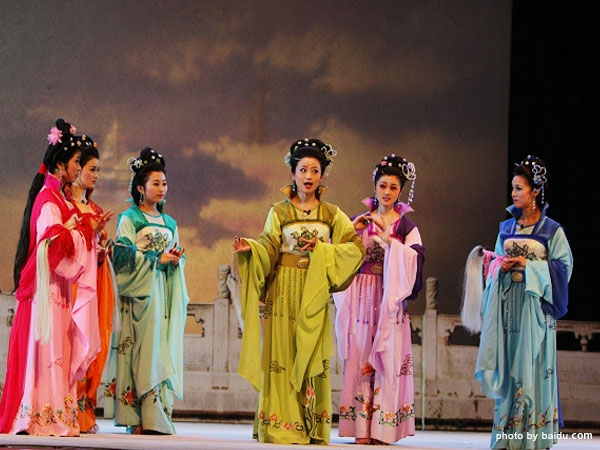 In the early Huangmei Opera, the performance focused on the meticulous simulation of natural life without a fixed program. The singing of Huangmei Opera belongs to the board type variation body, with three major cavity systems of coloratura, color cavity and homophony. The costumes of Huangmei Opera are the continuation of the traditional costumes of the Han nationality, but are mostly from the Tang, Song and Ming Dynasties.

Pingju opera, also known as "Pingqiang Bangzi Opera", "Tangshan Luozi" and "Bengbeng Opera", is one of the representative operas in northern China. It is mainly popular in North China and Northeast China. It is formed on the basis of the music of Lotus Rhyme and Bengbeng Opera, gradually absorbing and learning from the singing methods of Bangzi and Peking opera. 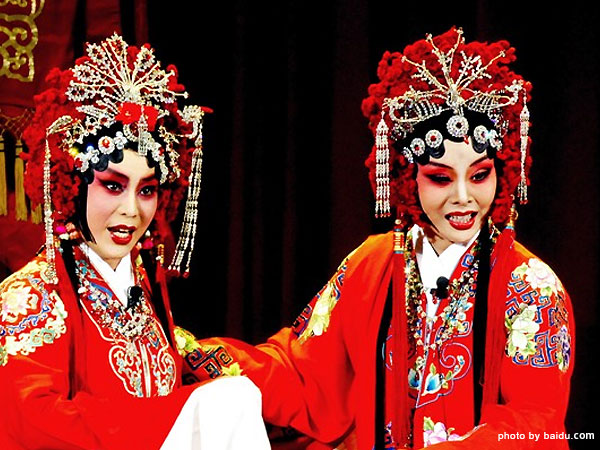 The singing of Pingju is a Banqiang style, with smooth and natural tunes. The accompaniment is mainly Banhu, and the percussion instruments are roughly the same as Peking Opera. On May 20, 2006, Pingju Opera was included in the first batch of national intangible cultural heritage list approved by the State Council.

In the history of nearly a hundred years, Pingju opera has left many popular classic plays, such as "Flower is a Go-between", "Shepherd Circle", "Spanking the Princess", "The Beautiful Courtesan", "Face Like Peach Blossom", "Spring of the Jade Hall", and so on. In the creation of modern drama, Pingju opera has also achieved fruitful results. "Little Son-in-law", "Liu Qiaoer", "Jinsha River", "Mistress Xiang Lin", "Sister Jiang", "The Red Guards on Honghu Lake" are typical representatives.

Henan Opera is one of the five major opera types in China, which originated in Kaifeng, Henan. Henan Opera is continuously inherited, reformed and developed on the basis of Henan Bangzi. After the founding of the People's Republic of China, Henan was referred to as "Yu" for short, so it was also called Yu Opera. 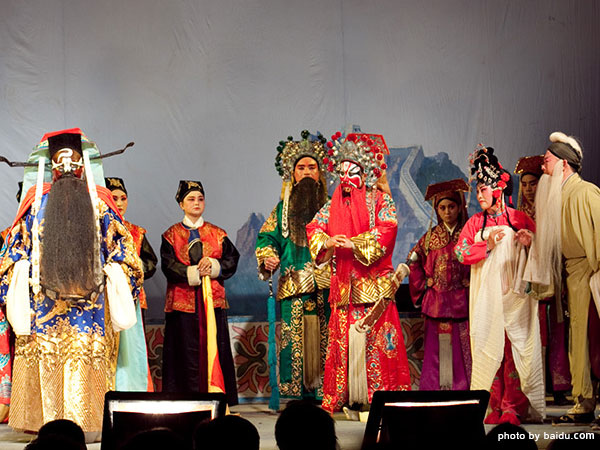 Henan opera is famous for its sonorous singing, intonation, vigorous voice, clear utterance, mellow charm, vividness, flesh and blood, and good at expressing the inner feelings of the characters. It is widely welcomed by people from all walks of life due to its high degree of artistry. It was named Henan Bangzi in the early days because of its musical accompaniment with common jujube Bangzi.

There are more than 1,000 traditional repertoires of Henan Opera, a large part of which is based on historical novels and romances. A large part of dramas depicts love, marriage, morality and ethics. The representative ones are "Hua Mulan", "Matchmaker", "Lady General Mu Takes Command", "Madam White Snake", "Liu hulan", "Yellow Crane Tower", etc.