Vietnam has a long-standing and distinctive culture connected with the history of the formation and development of the nation. Here we introduce 6 of traditional performances art in Vietnam that may arouse your interest to get a glimpse of Vietnam. 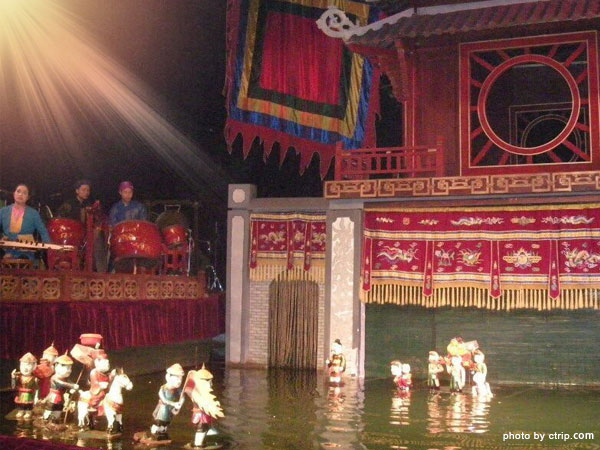 Water puppetry is the best-known and most distinctive Vietnamese art tradition, which has a history of about 1000 years. At present, water puppet shows are valued by Vietnamese society and play an important role in international cultural exchanges. The repertoire of the water puppet show is traditionally based on rural life, historical stories, myths and legends. Up to now, due to the needs of international exchanges, foreign stories such as Ugly Duckling, Mermaid and Snow White have also been added as the theme of the repertoire. The show takes about an hour and is one of the most entertaining attractions in Hanoi to date.

Thang Long Water Puppet Theatre is by far the most popular show in Hanoi. Located near Hoan Kiem Lake, this ancient theatre attracts locals and international visitors who want to see the Vietnamese traditional art form. In Hanoi, you should not miss this show because it is the only show that runs 365 days a year!

Cheo is a traditional form of Vietnamese national opera, which consists of folk songs with pantomime, intrumental music and dances, combined with instructive or interpretive sketches dealing with stories from legends, poetry, history or even daily life, with the meaning of ridicule, laughter and playfulness.

The Cheo dated back to 12th century in the Vietnamese Ly Dynasty, which originated mainly from a spontaneous folk-art form in the rural areas of northern Vietnam. It was usually performed in an open-air plaza outside the village, and then gradually specialized and indoorized.At present, Cheo is an integral part of Vietnamese theatre and attract not only people in the countryside and in towns but the foreign spectators as well. 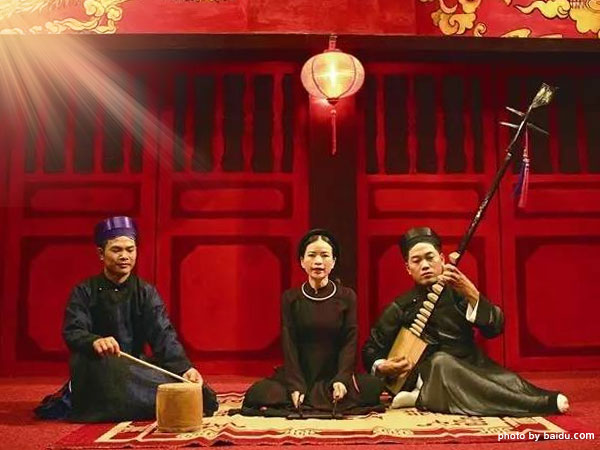 Ca Tru singing is an ancient genre of singing in the North of Vietnam that originated and flourished in around 15th century. Ca Tru comes from folk songs, folk music and some folk performances and dances. Ca Tru Singsing combines poetry and music, and some of them also include dance, which becomes a unique and comprehensive performance art. This form of performance is a fantastic blend of poems, singing and traditional instruments such as castanets, dan day and chau drum. Ca Tru singing was officially declared as an Intangible Cultural Heritage of Humanity by the UNESCO in 2009.

Quan Ho singing is a significant Vietnamese folk-song type, which originated around 13the century in Bac Ninh Province and has become an essential part of Vietnamese culture. Quan Ho singing is generally performed by two women and two men vocalists. Restrained, resonant, ringing and staccato are four singing techniques of Quan Ho Singing.

Quan Họ Singing express the spirit, philosophy and local identity of the communities in this region, and help build social bonds within and between villages that share a cherished cultural practice. Quan Ho Singing was inscribed in 2009 on the Representative List of the Intangible Cultural Heritage of Humanity. 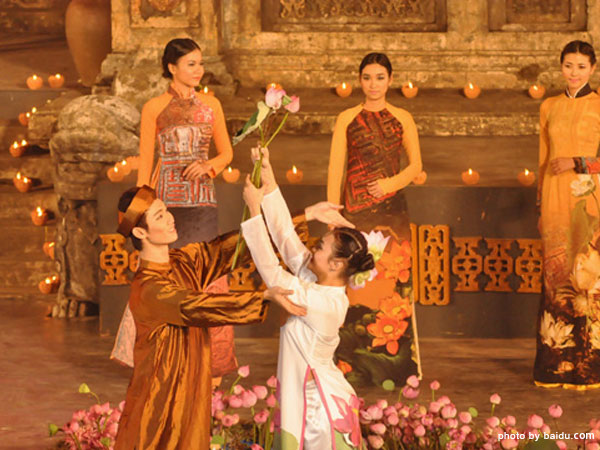 Hue royal court music, also known as Nha Nhac Cung Dinh in Vietnamese, is an ancient form of art performance that used to official music of royal court and can be traced to 13th century. Nha Nhac was generally performed at the opening and closing of ceremonies associated with anniversaries, official receptions, celebrations, religious holidays, coronations, funerals and official receptions. Nha Nhac was recognized as the official music of the country and it received high reputation in artistic and historical values. It was proclaimed as an Intangible Cultural Heritage of Humanity by UNESCO in 2003.