Religion and Belief in Laos

Around 67 percent of populations in Laos are Buddhist; other religions, including Animism, accounted for about 30.9 percent; 1.5 percent are Christians, and less than 1 percent are Muslims and Bahai. Catholics make up 0.6 percent of the population. Thus, Laos is a country that tolerates and respects religious diversity. Read on to know more about religion and belief in Laos. 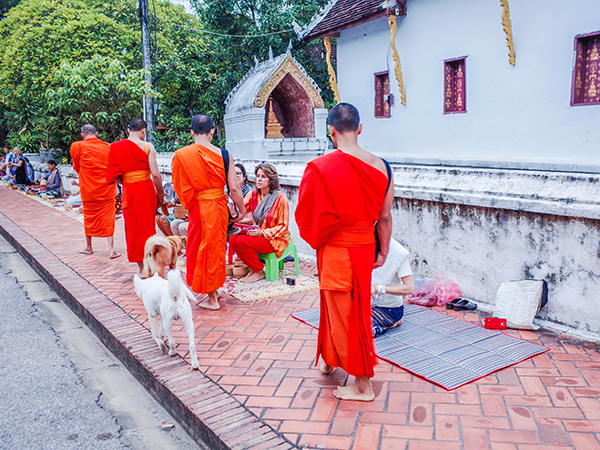 Before Theravada Buddhism was introduced into Laos, the Laotians believed in many gods and Brahmins. Theravada Buddhism had little influence when it first entered Laos. In the mid-14th century, Fa Ngum united Laos, established the kingdom of Lan Xang, and married the princess of Angkor as his queen. With the king's marriage to the Angkor princess, a large number of Angkor monks came to Laos to spread Theravada Buddhism and deeply influenced King Fa Ngum. Later, Buddhism became the official religion of Laos. In 1976, the only national Buddhist organization, the Lao Buddhist Federation, was established in post-liberation Laos.

Most Laotians are Buddhist; others are Catholic, Christian and Taoist. Its Buddhist basically keeps five precepts, but do not pledge to be a vegetarian. There are not many Christians in Laos, mainly among Vientiane's old people and the Hmong in the north. These Christians were developed by French missionaries in the mid-20th century, and now Vientiane has Christian churches and sister churches. There are also few Muslims, almost all of them in Vientiane, mainly Indians and Pakistanis. The largest Islamic mosque in Laos is next to the Vientiane fountain square.

Buddhism has its own disciplines and rules, and the punishment for violators is expulsion. The doctrine of Buddhism is based on this saying:" Desire and jealousy are the origin of harm." So to avoid suffering, we need to control ourselves and give up our desire. We need to practice and insist on the Buddhist scripture. In this way, one can reach the other side of the world of enlightenment from the world of mystery and enter the realm of nirvana.

There are more than 2,000 temples in Laos. In the past, Buddhist temples were not only the center of religious activities, but also the main place for spreading culture and education. Especially in rural and remote areas, the majority of farmers acquire knowledge at temples. Most of the temples in Laos are mainly distributed in Vientiane and Luang Phrabang. Luang Phrabang used to be the Kingdom and Buddhist center, as well as the site of the king of Laos. The temples there are ancient and exquisite; one of the most famous is Wat Xieng Thong, which has a history of 500 years.

Many Lao believe that the spirit of persons who die by accident, violence, or in childbirth are not reincarnated, will become the phi phetu (malevolent spirits) instead. Animist believers also scared about wild spirits of the forests. Other spirits associated with specific places such as the household, the river, or a grove of trees are neither inherently benevolent nor evil. However, occasional offerings ensure their favor and assistance in human affairs. In the past, it was a tradition to perform similar rituals before the beginning of the farming season. These ceremonies began in the late 1960s, were prohibited by the government as the successful liberation of various areas. This observance had apparently died out by the mid1980s, at least in the extended area around Vientiane.

Most Lao Theung and Lao Sung ethnic groups are animists, for whom a cult of the ancestors is also significant, although each group has different observance and beliefs. Spirits to the Kammu are similar to the phi of the Lao Loum; the house spirit is particularly important, and spirits of wild places are to be barred from the village. Lamet also have the similar beliefs, and each village must have one spirit practitioner (xemia), who is in charge of making all the sacrifices to village spirits. He also supervises the humans' communal house and officiates at the construction of any new houses.

When a spirit practitioner dies, one of his sons is elected by the married men of the village to be his successor. If he has none, one of his brother's sons has to be the successor. Ancestor spirits are very important to the Lamet since they look out for the well-being of the entire household. They live in the house, and it's banned from undertaking any activities without informing them of it. Ancestor spirits are fond of buffalos; thus, buffalo skulls or horns from sacrifices are hung at the altar of the ancestors or under the gable of the house. In order to avoid offending ancestral, numerous taboos regarding behavior in the house are observed spirits.