Etiquette and Taboo in Laos

From interpersonal communication to blessing etiquette, there are plenty of things that you should know before traveling to Laos. As Laos still keeps its traditional culture and custom very well, tourists who're planning a trip to Laos are recommended to read some information about etiquette and taboo in Laos, so that you could know what to do, and what not to do during your trip in Laos. 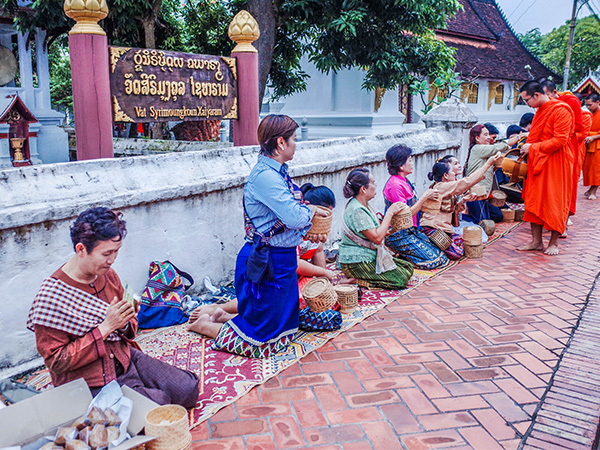 In interpersonal communication, Lao people are sincere and courteous. When meeting others at a social occasion, the most common greeting manner is Namaste. In some foreign affairs dominated by young people, Laotians sometimes shake hands with others. But for women, the Namaste is more suitable. Generally, Lao women are extremely deferential on social occasions and won't walk about in front of guests; they usually squat and sometimes even kneel in front of them while delivering items to guests.

Lao people have a traditional blessing etiquette – Tie. This is widely used in some occasions such as greeting and farewell, weddings, festivals, travel, etc. The main function of the tie line is to tie the soul, remove evil and devil, as well as gather good fortune. After tying the string, it is best to wear it at least for three days until it falls off, which will be more effective. When Laotians tying the knot for you, don't forget to do Namaste to them.

In rural and remote mountainous areas, Laotian ethnic groups wear their own clothes. And in urban and more economically developed areas, clothing has become more commercial and international. The ethnic costume of the Lao Loum is similar to the Dai people in Xishuangbanna, Yunnan province, China. Men wear a collarless double-breasted jacket with sand-cage trousers or long-leg wide-leg trousers. Women wear a collarless double-breasted jacket with a bobbin skirt. Whenever there is a festival or a major event, women should wear the national costume with an elegant up-do; men wear suits more than national costumes. 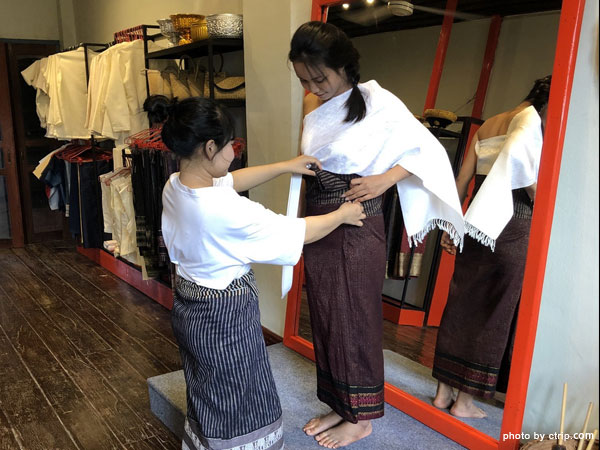 Be a guest in the Laotian home; a gift should be prepared with exquisite packaging. Popular gifts among people are flower basket, handicraft, cigarette and wine; when attending a wedding or a festal occasion, usually, the cash is more popular.

►Since the Lao people generally believe in Buddhism, it is important to understand the taboos of Buddhism when getting along with Laotians. In general, the following four points are particularly important:

►The temple is pretty sacred in the eyes of Lao people. Please dress appropriately when entering the temple. The upper part of the body should not show the shoulders and navel, and the lower part should not show above the knees. Be respectful in front of the Buddha. Even the small Buddha statues or sculptures are all sacred in the eyes of the local people; and couldn't be touched without permission.

►Due to the popularity of Theravada Buddhism, local people are conservative. Tourists should pay attention to their behavior in public, avoid intimate gestures and wear revealing clothes. The locals are good-natured and usually speak softly. Tourists should not make much noise in public places.

►Most Laotians live near rivers and streams, and there is a strict distinction between the uses of the river near the village: The upper stream is for drinking, no bathing or clothes washing. The middle stream is where the men bathe, and the downstream is where the women bathe. When drawing water, as long as there is a public utensil such as bamboo canister at the source of the water, it's not allowed to use your own utensil to draw water directly. There's also a distinction of water used indoors, generally speaking, if there's water in a small bamboo tube or gourd for drinking, it cannot be used for stuff washing.

►In Laos, tipping is not necessary, but in some foreign-related hotels, it would be better to tip the waiter about 10-15%. At the store, most goods have a fixed price, so bargaining is not appropriate. If you are at an individual stall, a modest counteroffer is acceptable, but if your offer is accepted, you'd better buy it directly.

►In Laos, people have a bad impression of white, which is regarded as an unlucky color. Usually, Laotians do not hang white mosquito nets in their homes, and they do not cover themselves with white quilts when they sleep.