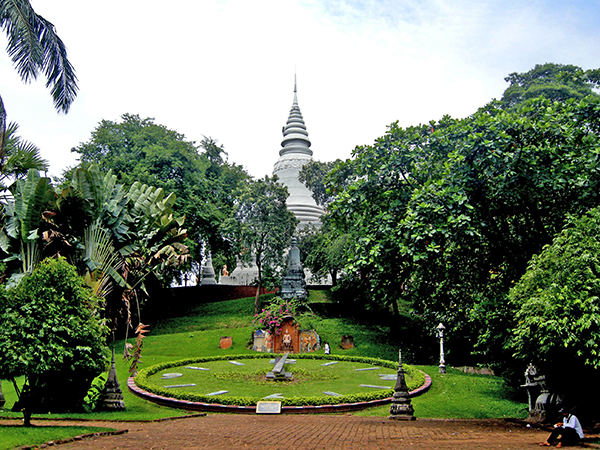 Wat Phnom, also known as Tashan Mountain, is located in the north of the city of Phnom Penh. It is located on a hilltop about 100 meters high and is the highest point in Phnom Penh.Wat Phnom is a landmark building in Phnom Penh and a place for local people to pray. At the entrance to the temple, there is a strong smell of incense, devout believers , and hawkers selling lotus flowers for ritual Buddha. These lotus are beautiful and containing cockroaches.

Tashan Mountain is the birthplace of Phnom Penh. It is about 100 meters high. The top of the mountain is equipped a statue of Madame Penh. It is one of the symbols of Phnom Penh. Standing on the mountain, you can overlook the entire city of Phnom Penh. Wat Phnom is located on the top of the mountain, and is a majestic hilltop with a height of about 30 meters. At the foot of the mountain is a small park where citizens can rest. The sculpture of the Hydra (a seven-headed snake) God, which can be seen at the entrance, symbolizes the “good weather”. The name of the Hydra God, Naga, is regarded as the sacred symbol of the origin of the country of Cambodia and the patron saint of the prosperity of the kingdom.

Legend of Wat Phnom: According to legend, in the 14th century, a woman named “Penh” picked up a statue of Buddha that floated along the Mekong River due to rising water, built a hill, repaired a temple, and then gradually developed into a prosperous town. The capital of the 15th century country was moved to this place. It was officially named as “Hundreds of Bags”, meaning “Mountain of the Lady of Penh”, and the local overseas called “Phnom Penh”.

There is a museum in the northwest of Wat Phnom, which houses many ancient statues and handicrafts. If you go from Wat Phnom to the National Museum, you may miss it.

What to do in Wat Phnom?

Wat Phnom is the highest point in Phnom Penh. So you can overlook the hole city Phnom Penh in Wat Phnom.

Wat Phnom is a landmark building in Phnom Penh and a place for local people to pray. There are many people to pray in this temple. If you go to Wat Phnom, you can’t miss it.

How to go to Wat Phnom?

You can walk to Wat Phnom. It is about 20 minutes walk from the Royal Palace. Another way, You can take a tuktuk to Wat Phnom .