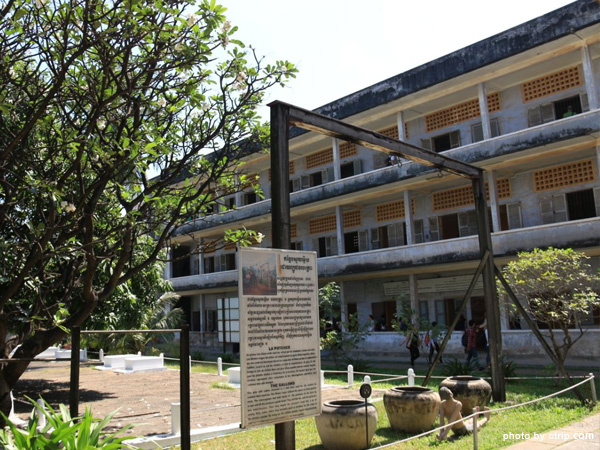 Phnom Penh is the capital and the largest city of Cambodia. It is located in the delta between the Mekong River and Tonlé Sap Lake. Where to go in Phnom Penh if you are interested in the culture or history of Cambodia? In addition to the National Museum of Cambodia, there is a famous museum in Phnom Penh - Tuol Sleng Genocide Museum, also known as S-21 Prison, where you can learn about history of Khmer Rouge Revolution. The atmosphere of the museum is very dignified, and the visual picture is a bit chilling.

Tuol Sleng Museum, also known as the S-21 Prison, is located in the southern part of Phnom Penh. It was originally a high school called Tuol Svay Prey, whose name comes from Prince Sihanouk and has five buildings. In 1975, the school was transformed into a concentration camp and a collective execution center by the Communist Party of Cambodia (Khmer Rouge).

The building was covered with barbed wire with high-voltage electricity, and the classroom was transformed into a narrow cell and torture station. To prevent the prisoner from escaping, the window was blocked by iron bars and wrapped around the wires. After the renovation, the area was renamed Security Prison 21 (S-21), referred to as S-21, also known as Tuol Sleng.

In 1975, the Khmer Rouge Revolution occupied Phnom Penh. In order to practice the classless society that it aspired to and step into communism, the population of more than 2 million in Phnom Penh and all major cities was driven to country. Private ownership was completely abolished. Money and commodities were cancelled. Cities and families were eliminated step by step. When all the population was rushed to the countryside, Pol Pot’s Khmer Rouge began the first round of cleansing, mainly for intellectuals at the time.

Pol Pot declared that intellectuals can return to the city with priority, so more than 20,000 teachers, civil servants, doctors and the bourgeoisie in the eyes of the Khmer Rouge regime, among them women, children, even pregnant women and babies - were brought back to Phnom Penh, and then were concentrated in the Security Prison 21 (S-21), where they were brutally tortured. Many of the dead people were buried in the mass graves of the prison, and the rest were sent to a Killing Fields of Choeung in the suburbs. In the five years ruled by the Khmer Rouge, more than 2 million people were massacred, accounting for 30% of the country's total population. When Vietnamese forces liberated Phnom Penh in 1979, there were only 14 bodies and 7 survivors left in the concentration camp. The instruments and presentations displayed in the museum are creepy. 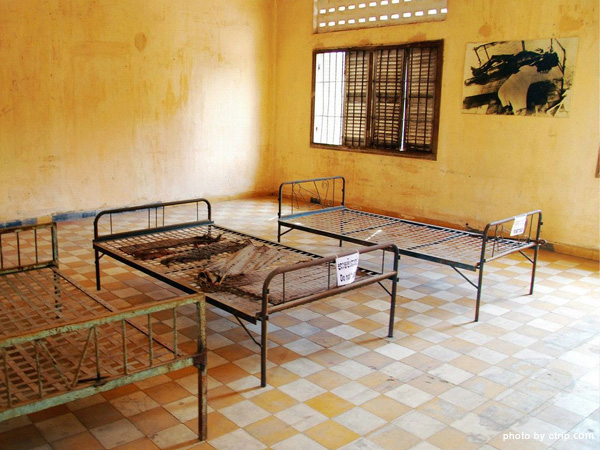 Life in the S-21 concentration camp is extremely bloody and terrifying. After the prisoner arrives at the concentration camp, he must first take a photo archive, then take off all the clothes on his body for a full-body examination to remove items that may cause suicide, and then they are taken to the cell. Prisoners held in smaller cells were shackled on the wall, while prisoners held in larger cells were all tied to a long iron bar. The prisoner must sleep on the cold ground, not being shackled, and even being shackled while sleeping.

Cambodia was originally a Buddhist country. Buddhism pays attention to love, respects life and does not harm the soul. However, the Khmer Rouge changed it. After taking power, the government evacuated the city, abolished the currency, closed Buddhist temples and schools of all sizes, and completely revolutionized it!

The Holocaust massacre is not a racial, tribal or religious conflict, but a complete socialist society that is more purely reconstituted than the Soviet Union, China and Vietnam. In order to achieve this goal, it refuses to try any peaceful transformation or persuasion education method, cancel any transition period, choose the simplest and direct method, and use the violence to eliminate a part of the population from the beginning to achieve social transformation.