Mehtab Bagh, translating to Moonlight Garden, is perfectly aligned with the Taj Mahal along the Yamuna River. It is said that Mehtab Bagh was the Mughal emperor Shah Jahan's ideal spot for viewing the Taj Mahal. If you are photography lovers, this garden is the best place for picturing the beauty of the Taj Mahal from various angles. 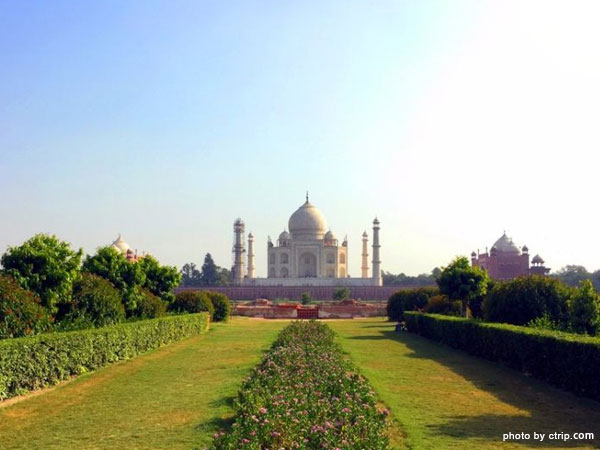 Mehtab Bagh was initially built by Emperor Babur as the last in a series of 11 parks on the Yamuna's east bank. Although Mehtab Bagh is a perfect place to view the Taj Mahal, it is not built for the Taj Mahal. Mehtab Bagh was built in the 16th century by the founder of the Mughal dynasty Babur, while the Taj Mahal began around 1632 by the fifth Mughal emperor Shah Jahān. Therefore, Mehtab Bagh was long before the Taj was conceived. Babur originally planned to build in Persian style, with reflecting pools, water fountains and trees.

However, due to frequent floods from the Yamuna River, Mehtab Bagh fell into disrepair until it was little more than a huge mound of sand. Winds would pick up sands that left in the plot and travel to the Taj Mahal. To avoid the Taj Mahal from the erosive effects of the sands blown across the river, the government launched a restoration project for Mehtab Bagh to its original state in the early 1990s. The Archaeological Survey of India (ASI) is responsible for the restoration. The plants used in Mehtab Bagh were ones that were originally a part of Mughal gardens. Citrus trees, guava trees, Ashoka, Jamun, neem, and hibiscus were planted in Mehtab Bagh. Now Mehtab Bagh is a good place for viewing the Taj Mahal.

Mughal architecture building style flourished in northern and central India under the patronage of the Mughal emperors from the mid-16th to the late 17th century. Mehtab Bagh is a typical Mughal styled garden with four garden layouts. The garden is square and 300 meters long on each side. According to the inscriptions, there were several gardens aligned to Mehtab Bagh, but with time elapsed, they disappeared.

There is a dome tower on the southeast side of Mehtab Bagh, which is made from sandstone and is octagonal in shape. It's said that Mehtab Bagh had four towers, one on each corner. It's a pity that there is only one left on the southeast side. The highlight is the large octagonal pond in the south of the garden. It's like a mirror, from which you can see the reflected image of the Taj Mahal. A waterfall in the northern part of Mehtab Bagh supplies water to the pond.

The best time to visit the garden is during sunrise and sunset, when the view of the Taj Mahal will be splendid. The temperature will be high and dehydrate in summer days from March and ends in June. And July to September is the monsoon season. Heavy rains will flood the garden. We highly recommend visiting in winter days starting from October and ends in February. You won't be bothered by scorching hot temperatures and heavy rains.

Tourists visit Mehtab Bagh to take pictures of the beauty of the Taj Mahal from different angles, while ignoring the charming of Mehtab Bagh. Different from busy and crowded Taj Mahal, Mehtab Bagh is tranquility and leisure. Parrots, Indian mynah birds and pelicans dot the area and chipmunks run about you without cares. These elves will make you have a chance to close nature. Enjoy a walk amidst its beautiful pools, fountains, fruit trees and windy canopies. The enchanting fragrance of the different species of flowers will rejuvenate your spirits.

How to go to Mehtab Bagh

It's situated opposite the Taj Mahal on the northern side of the Yamuna River. Taxi, auto, rickshaw, and bus are available from any part of Agra to reach this moonlight garden and Taj Mahal.