Agra Fort is one of the famous Mughal forts in India. The impressive red sandstone architecture attracts millions of tourists from all over the world. It rests on the west bank of the Yamuna River on the edge of central Agra. Agra Fort has a history of more than 400 years and was listed as a World Heritage Site in 1983. As its palaces and city walls are all made of red sandstone, it is also called Agra Red Fort, which is the same name as Red Fort in Delhi. 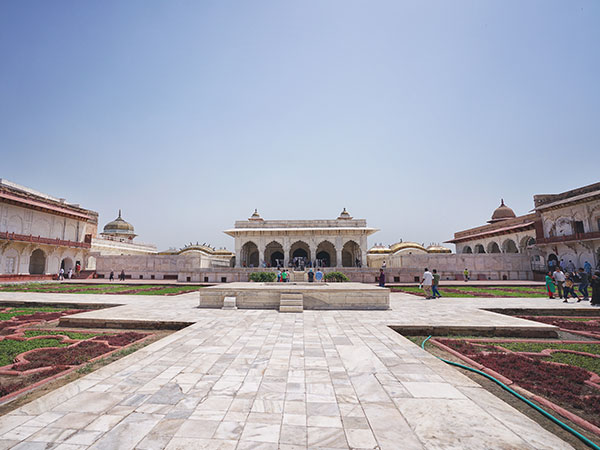 Agra Fort was the main residence of the emperors of the Mughal Dynasty until 1638, when the capital was shifted from Agra to Delhi. The castle is high and neat, exquisite craftsmanship. In order to balance religious relations, the king at that time married several queens from Hinduism, Islam and Judaism. Therefore, the Agra Red Fort has become a model for the coexistence of three religious architectural styles. It is common to see the hexagonal symbols of Judaism and the lotus pattern of Hinduism under the arch doors of Islam. Both the base and the main building are in Indian style, but the top is the iconic minaret of Islam, which symbolizes the social structure of the Mughal Empire. The bottom layer is the native Indian culture and feudal lord, and the top layer is the Persia ruler, who believes in Islamic. 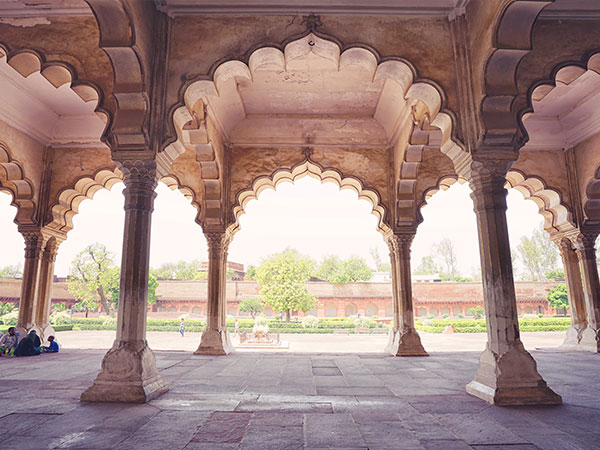 Since the 16th century, Agra became the capital of the Mughal dynasty. Emperor Akbar (grandfather of Shah Jahan) selected the site of the current Agra Fort and spent nearly 8 years to build the old castle in 1573 finally. Akbar was primarily planned to build the Agra Fort as a military structure, but his grandson Shah Jahan transformed it into a palace and built many quarters and mosques. The 4th~6th Mughal emperors lived in Agra Fort before the capital city moving to Delhi. Agra Fort was not only an important military defense hold and royal residence but also represented the might and prestige of the Mughal Empire. 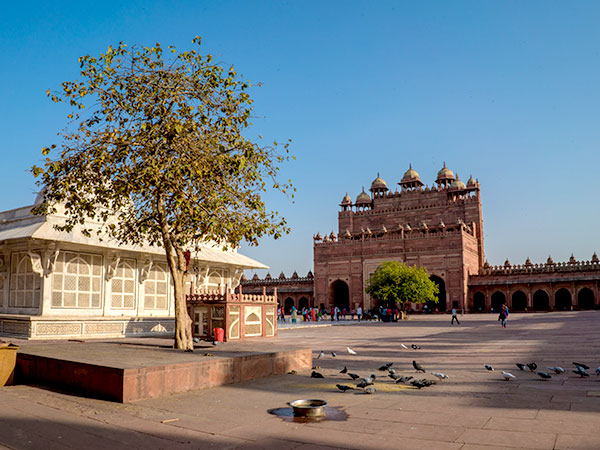 As the last dynasty in India, the Mughal dynasty gradually declined in modern history, and eventually became a puppet government of Britain. Even the Red Fort in Agra once had British troops stationed in it. At its heyday, the crescent-shaped fort's wall is over 20m in height and measure 2.5km in circumference and more than 500 buildings inside, but only a few of them have been preserved today. The exquisite corridors and delicate carvings of multiple styles still allow us to imagine its grandeur.

Agra Fort records the glorious times of the Mughal Empire, soldiers of the British colonists once stationed, and now it welcomes tourists from all over the world.

There are opulent palaces, mosques and gardens and rich history in Agra Fort. 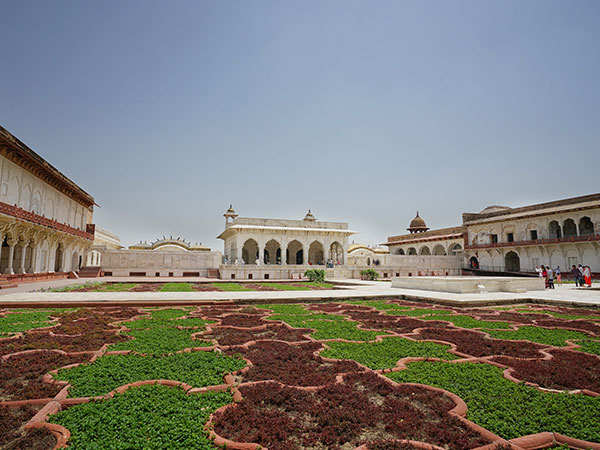 The Diwan-i-Khas, also called Hall of Private Audience, was used to meet important dignitaries or foreign representatives. Shah Jahan's Peacock Throne once housed in Diwan-i-Khas. The Peacock Throne was inset with precious stones, including the famous Koh-i-Noor diamond. 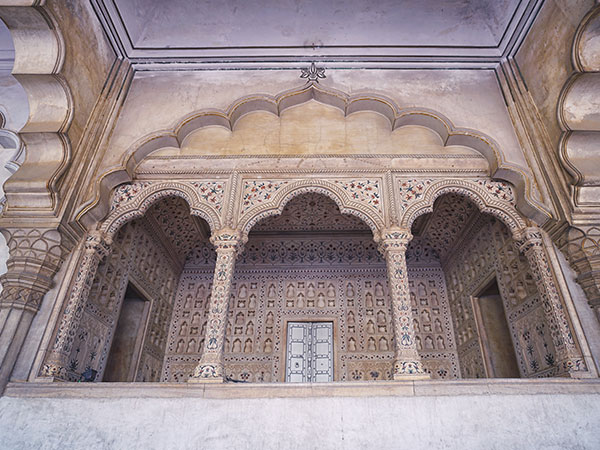 Moti Masjid, also called the Pearl Mosque, was built by Shah Jahan. The perfectly proportioned Moti Masjid is made of white marble, which makes it tranquility.

Jehangir's Palace is the largest residence in Agra Fort. It's built by Emperor Akbar as a gift for his son Jehangir.

What's the relationship between Agra Fort and Delhi Fort

The Red Fort in Delhi is very similar to Agra Fort because the Agra Fort served as a model for Shah Jahan's Red Fort in Delhi. Both of them have the same Mughal architecture, structure, nomenclature, etc. Agra Fort is better preserved and more accessible (as large parts of Red Fort in Delhi are held by the Indian Army). If your time is limited, just choose one of them to visit. 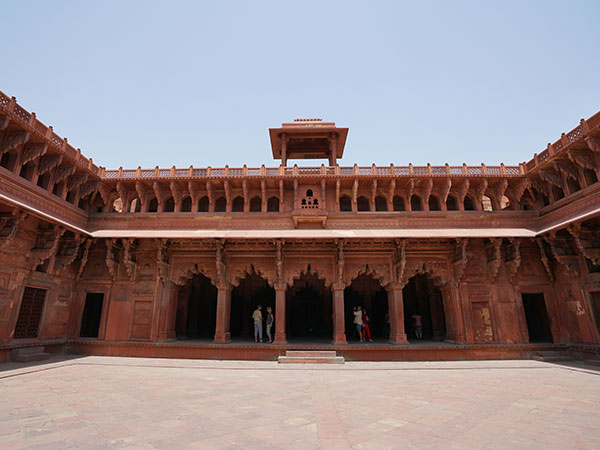 How to get to Agra Fort? 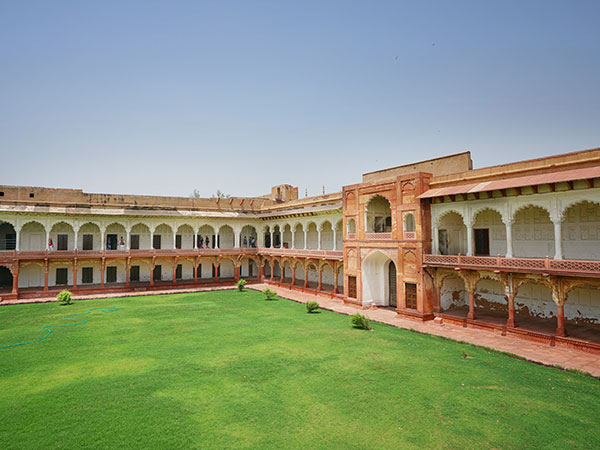 ♦ The best time to visit Agra Fort is at sunrise and sunset.

♦ There is no shadow in the fort, try to avoid visiting at noon.

♦ Men and women entered in separate lines for body checks before entering.

♦ Agra Fort is closed on every Friday.

♦ Today visitors can view limited sections, and the remaining area is occupied by the Indian military.

♦ The entrance of the fort is from the grand Lahore Gate. The Delhi Gate is unfortunately closed to the public.

♦ There is a light and sound show after sunset; you can stay for that if you don't have any plans for the evening.

♦ The audio guide is NOT available at the ticket counter. You need to download it on your mobile phone to use. 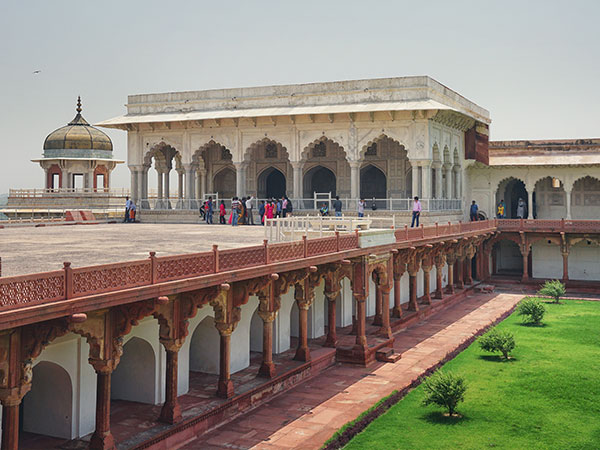 If you are history lovers and want to know about the life of Mughals, how they lived, the impressive Agra Fort is a must-visit site you can't miss. We suggest you read the history of Agra Fort before coming here or take a tour guide along with you to explore more.