Beijing National Stadium, officially the National Stadium, also known as the Bird's Nest, is a stadium in Beijing. The stadium (BNS) was jointly designed by architects Jacques Herzog and Pierre de Meuron of Herzog & de Meuron, project architect Stefan Marbach, artist Ai Weiwei, and CADG, which was led by chief architect Li Xinggang. The stadium was designed for use throughout the 2008 Summer Olympics and Paralympics and will be used again in the 2022 Winter Olympics and Paralympics. The Bird's Nest sometimes has some extra temporary large screens installed at the stands of the stadium.

In Chinese mythology, the sun is represented by a circle and the moon by a square, reflected by the shape of the bird's nest and the Water Cube aquatic centre opposite, reinforced when the venues are lit at night, red for the Bird's Nest and blue for the Water Cube. The forms also echo the Chinese symbols for male and female, and are built either side of the north-south axis road which runs in a perfect straight line for three miles through Beijing, centered on the Forbidden City.

Construction started on December 24th, 2003, and was completed in March 2008. The total cost was 2.267 billion yuan. As a national landmark and the main stadium of the 2008 Olympic Games, the features are very significant. The stadium is a super sports building and a large stadium. The main structure design has a service life of 100 years, the fire resistance level is level one, the seismic fortification intensity is 8 degrees, and the underground engineering waterproof level is level one. 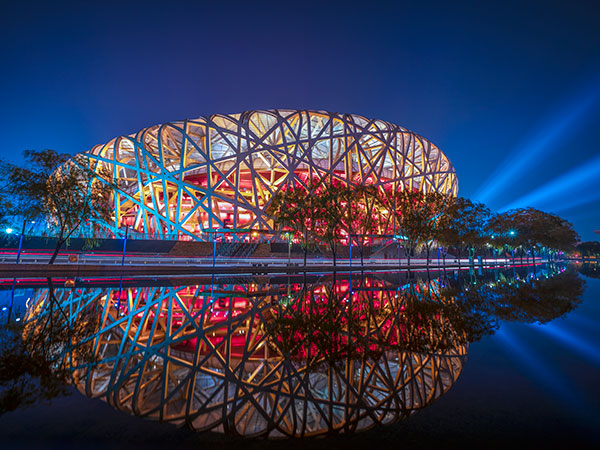 The geometry of the foundation and the stadium is one, like the roots and trees. If you walk on the gentle grid-like stone road which continues the structural texture of the stadium, you will be impressed by the building. Sinking gardens, stone-paved squares, bamboo forests, and mineral mountainous landscapes are all brilliant.

The space effect of the stadium is novel and radical, but simple enough. The appearance of the stadium is pure structure, and the facade and structure are unified. The various structural elements support each other and converge into a grid which likes weaving. In order to make the roof waterproof, the gap between the stadium structures are filled with light transmissive film. Since all facilities – restaurants, rooms, shops, and bathrooms are individually controlled units, the overall closure of the façade of the building is therefore extremely unnecessary. This makes the stadium have natural ventilation and is the most important aspect of the stadium's environmental design. 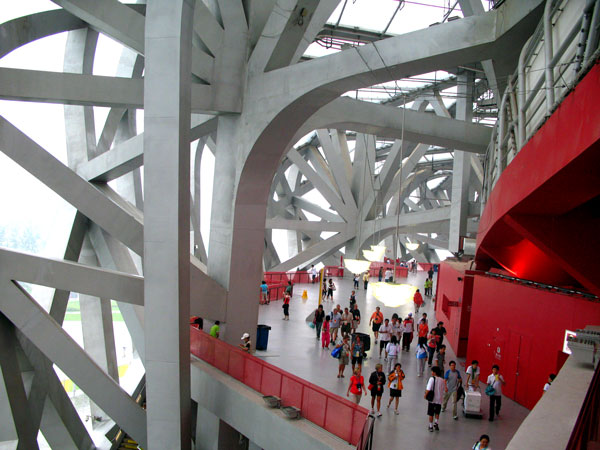 The stadium's design originally called for a capacity of 100,000 people; however 9,000 were removed during a simplification of the design. The new total of 91,000 was shaved further when 11,000 temporary seats were removed after the 2008 Olympics; bringing the stadium's current capacity to 80,000. 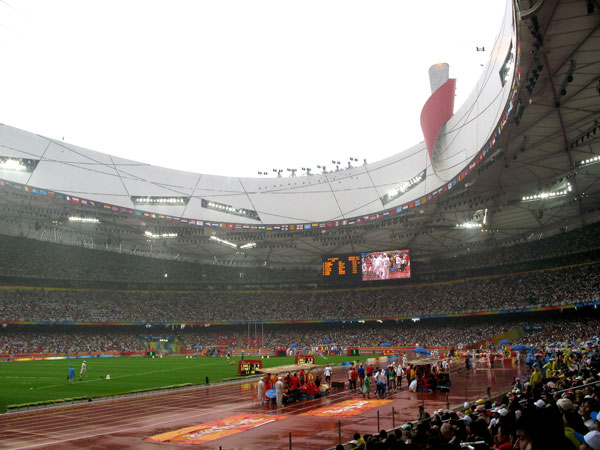 Beijing National Stadium hosted the spectacular Opening and Closing Ceremonies, athletic events, and football final of the 2008 Summer Olympics, from 8 August to 24 August 2008.

The stadium also hosted the Opening and Closing ceremonies and athletic events of the 2008 Summer Paralympics from 6 September to 17 September 2008.

Though designed for track & field events of the Olympics, the stadium will continue to host sporting events, such as football, afterwards.

A shopping mall and a hotel, with rooms overlooking the field, are planned to help increase use after the Olympics. It will become the most important public space in Beijing."

How to Get to Beijing National Stadium

By subway: Take Line 8 or Line 15 to Olympic Green Station and leave from Exit D. Then walk for about 760 meters to reach Beijing National Stadium.