Close in each Monday (Except China National Holiday, July to August)

The Forbidden City is a palace complex in central Beijing, China. The former Chinese imperial palace from the Ming dynasty to the end of the Qing dynasty (the years 1420 to 1912), it now houses the Palace Museum. The Forbidden City served as the home of emperors and their households as well as the ceremonial and political center of Chinese government for almost 500 years.
The Forbidden City is known as the world's five major palaces (Forbidden City in Beijing, the Palace of Versailles in France, Buckingham Palace in UK, the White House in America, and the Kremlin Palace in Russia). In 1961, the State Council announced the Forbidden City as the first batch of national key cultural relics protection units. In 1987, the Forbidden City was listed as World Cultural Heritage by the UNESCO. Juries evaluated: "The Forbidden City is the supreme power center in China over five centuries, with its landscape architecture, and huge buildings which accommodate 9,000 rooms of furniture and crafts, it has become a priceless historical witness of the Chinese civilization of Ming and Qing era. 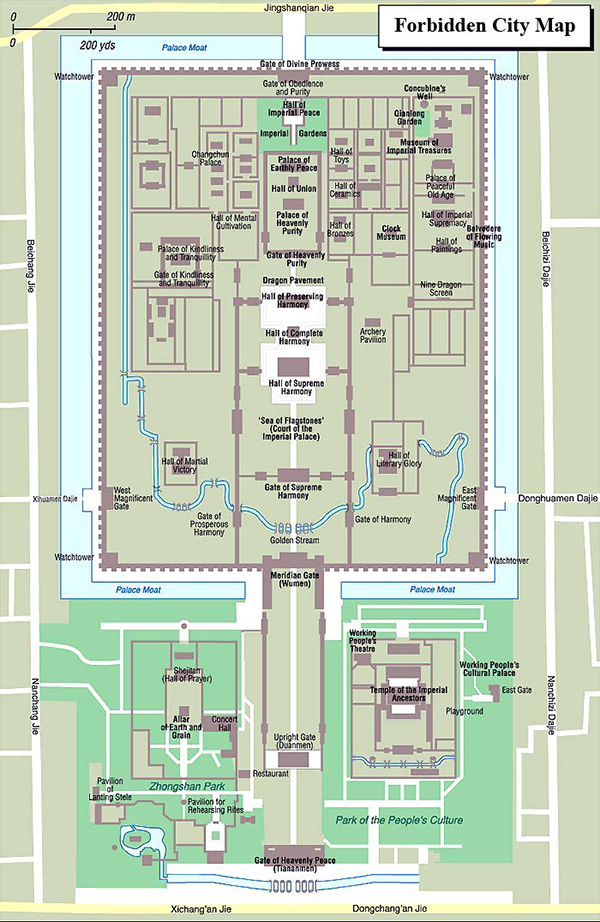 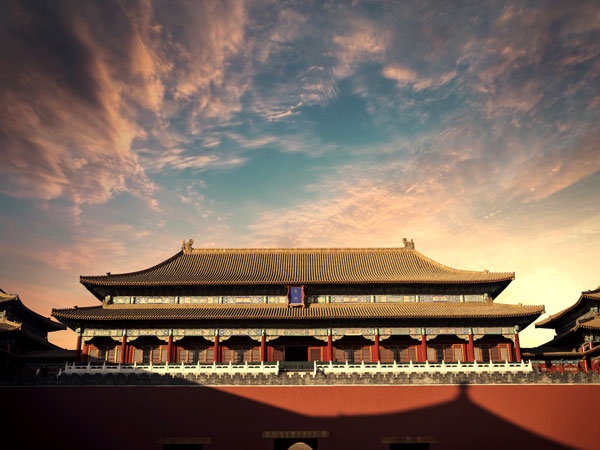 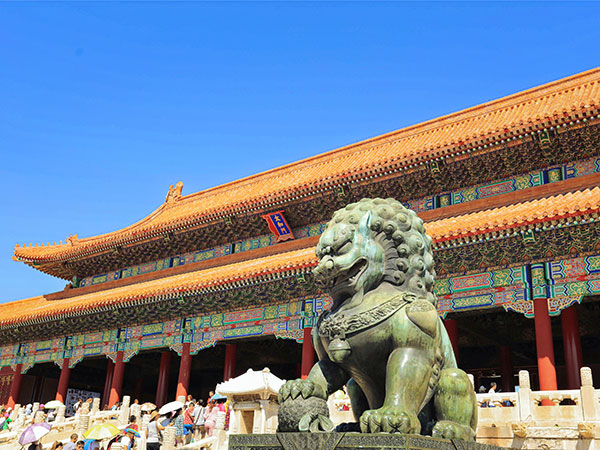 Gate of Supreme Harmony is the largest palace gate in the Forbidden City and the main entrance of the Outer Court. When originally built in Ming Dynasty, it was called Fengtianmen. It is the door for the Hall of Supreme Harmony (commonly known as the Throne Room). It was a magnificent door with the highest standard in ancient China. The gate is three bays deep and seven bays wide with a construction area of about 1300 square meters. 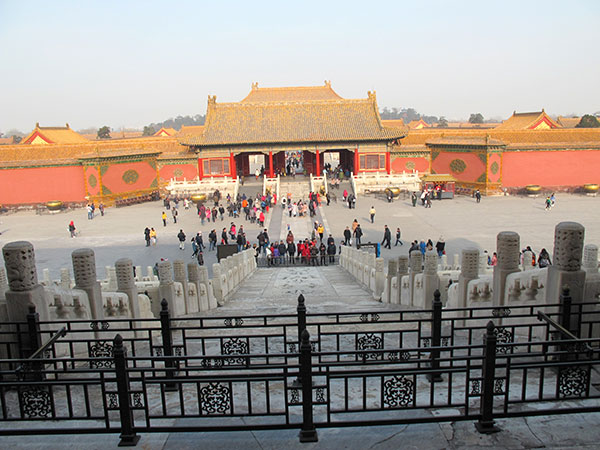 The Gate of Heavenly Purity is the main gate of the Inner Court of the Forbidden City. The gate once led people to Forbidden City’s residential quarters. In the Qing Dynasty, it was also a place for handling government affairs. The ceremony of the Qing Dynasty's "Yumen Hezheng Administration", fasting, and so on were held in the Gate of Celestial Purity. 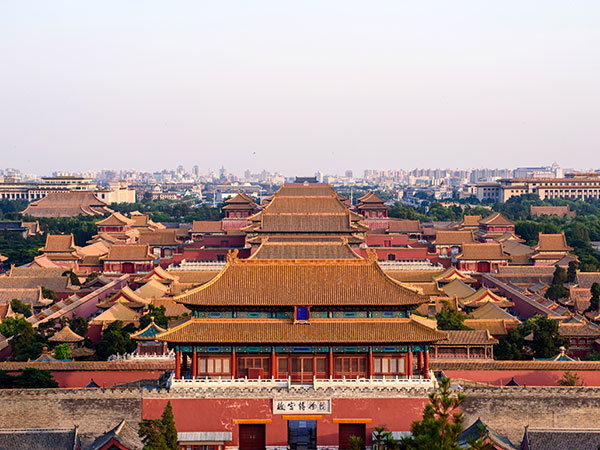 Gate of Devine Might (Shenwu Gate) is the north gate of the Beijing Forbidden City. It was first built in the Ming Yongle 18 Year (1420) and was called Xunwu Gate during that period. Xuanwu is one of the four ancient mythical creatures, speaking from orientation, the Green Dragon was on left, the White Tiger was on right, the Vermilion Bird was in the front, and the Xuanwu was in the back. Xuanwu represents the north, hence, most of the north gate of the imperial palaces were named "Xuanwu". The gate was built in Qing Emperor Kangxi period, and was renamed "Shenwu Gate". 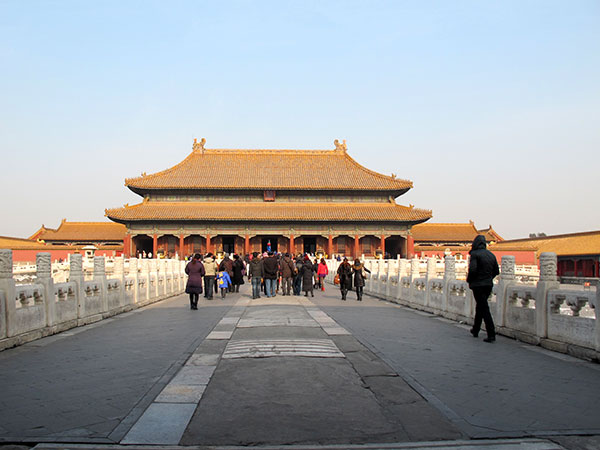 Palace of Heavenly Purity (Qian Qing Gong), one of three imperial harems, is the main hall of the imperial palace in Beijing Forbidden City. It is the place for the residence and the day-to-day public affairs of Ming and Qing emperors in the Forbidden City. It is the first of the three imperial harems, locate inside the Gate of Celestial Purity. "Qian" means "Heaven", and "Qing" means "Purity"; the name of this palace means: lucid sky - a symbol of national stability, also a symbol of the emperor's clear and magnanimous behaviour. 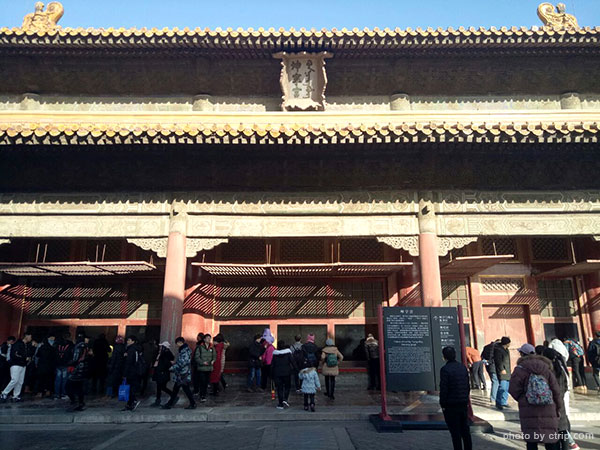 The Palace of Earthly Tranquility (Kunning Palace) is a double-eaved building, nine bays wide and three bays deep. In the Ming dynasty, It was the residence of the Empress. The name of Palace of Earthy Tranquility in Chinese represents the combination of masculine and feminine. 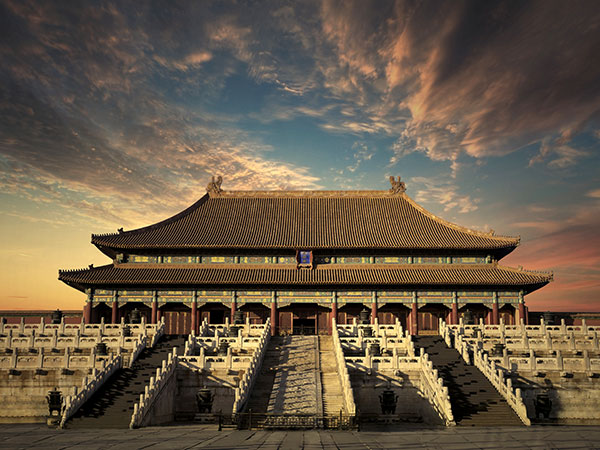 The Hall of Supreme Harmony, also known as the Hall of Golden Chime, is one of the 'three main palaces' in Beijing Forbidden City, and it is China's existing largest wood structure palace. It is located in a powerful and influential position of the north-south main axis in the Forbidden City. It was first built in 1420 and through many times destroys by fire and rebuilt. 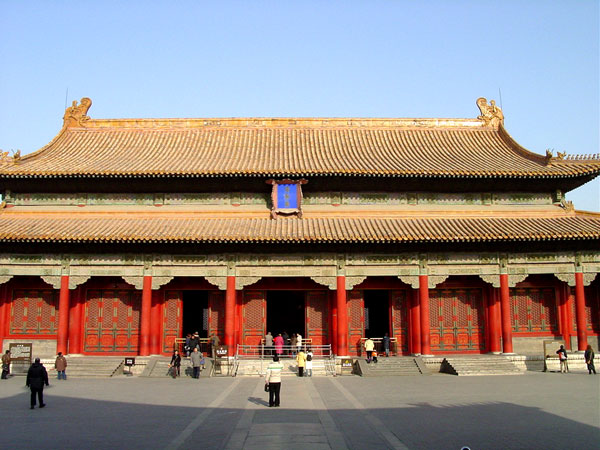 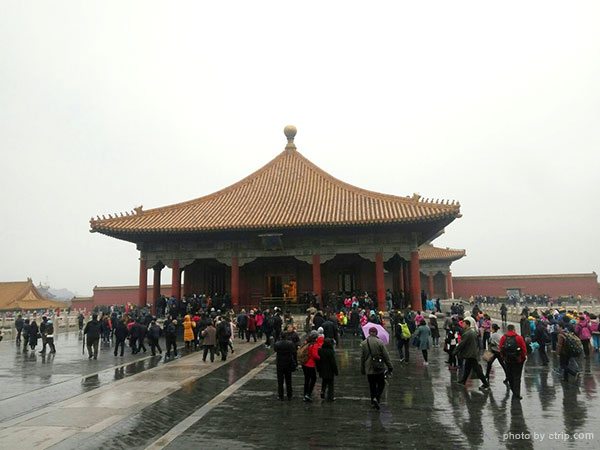 The Hall of Central Harmony (Zhonghe Hall) is one of 'the three main palaces' in Beijing Forbidden City. It is located between the Hall of Supreme Harmony and the Hall of Preserving Harmony. The hall was the place for the emperor to take a rest before holding grand ceremony and accepting officials' worship in the Hall of Supreme Harmony. While holding a memorial ceremony for the heaven and earth, the emperor would review the congratulatory message the day before; also would check the seed and farm implements before the altar of the god of agriculture. Central Harmony means 'everything should be finished in a perfect way so that the harmony comes into being'. 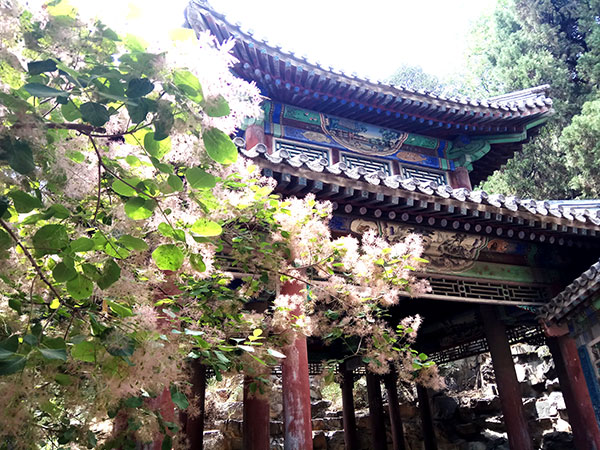 The Imperial Garden is located in the middle of Beijing Forbidden City, back of the Palace of Earthly Tranquility. It was used as a garden for resting and playing by the queen and the princess. Also, it was used to sacrifice and keep fit, collect books and read books. This garden was first built in 1420 and was expanded later but the original style has been still kept. It is 80m from south to north, 140m from east to west, covering an area of 12000m². The main building along with the surrounding pavilions, terraces and open halls, fresh and green pines, cypresses and bamboo, form an evergreen garden landscape. The arrangement of the garden is symmetrical but not rigid, the rare stone; luxuriantly green trees especially some old trees, adorn the garden and make it full of interest; the colorful path is primitive and special.

How to Get to Forbidden City

Visitors may take Subway Line 1 to get off at Tiananmen East Station or Tiananmen West Station, and then walk to the entrance of it. It is recommended to spend 2.5 to 3 hours to visit Forbidden City. 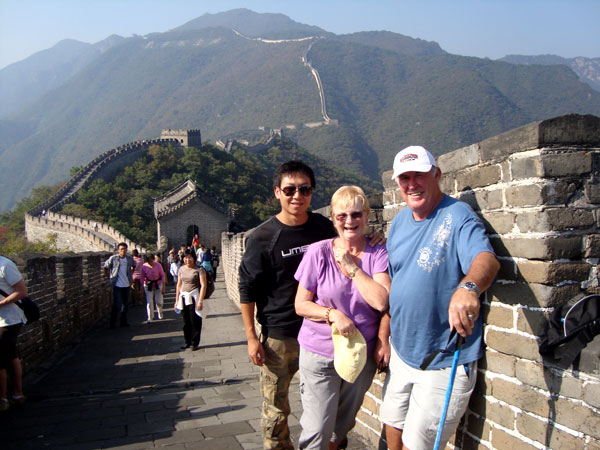