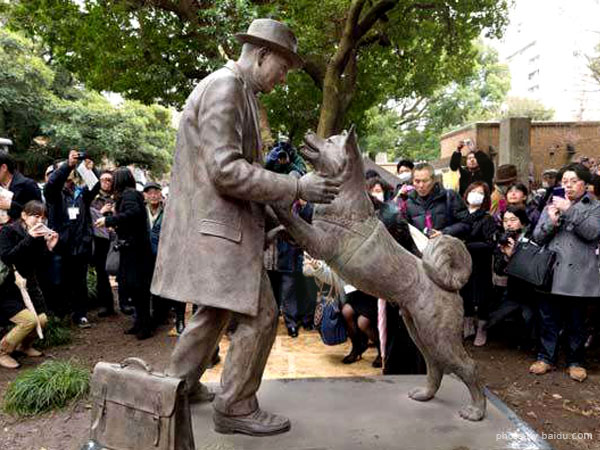 The loyal dog Hachiko statue is made of bronze and has always been a popular landmark for people to visit in Shibuya, Tokyo. According to legend, the professor of the University of Tokyo, Ueno Saburo’s dog, is waiting for the owner to return at Shibuya Station every day. Even after the owner’s death, he still insists on waiting and refuses to leave. This moving story and the dog Hachiko are still deeply loved by people.

" Hachiko " is a Japanese Akita dog born in Odate City in 1923. It was brought to Tokyo by owner Ueno Saburo in 1924. Every morning, the " Hachiko " watched the owner go to work at the door of the house, and then pick him up at the nearby Shibuya Station in the evening. One night, Ueno Saburo did not return to Shibuya Station as usual. He suddenly died of a heart attack at work. However, " Hachiko " remained faithfully to wait for his owner in front of Shibuya Station for 9 years until  His death on March 8 1935.

Dr. Ueno Saburo, the owner of the loyal dog, is an agricultural civil engineer who was a professor at the Faculty of Agriculture, Tokyo Imperial University. In 1925, Dr. Ueno died of illness.

After the death of Dr. Ueno Saburo, the relatives of Ueno Saburo brought the one-and-a-half-year-old eight people back home. But in the mind of the Hachiko, its only real master is still Ueno Saburo, so it still wait for his owner everyday at Shibuya Station for 9 years.

In 1934, the statue of Hachiko was established. The following year (1935), he died in August and was buried with the owner after his death. In 1934, the Hachiko Statue  at Shigaya Station was established. The opening ceremony was attended by 300 celebrities. On March 8th every year, a grand commemorative ceremony will be held next to Shibuya Station. Thousands of owners of dogs will pay tribute to the loyal dog Hachiko.

On March 8, 2015, the 80th anniversary of death of Hachiko, at the University of Tokyo's Department of Agronomy (located in the Bunkyo-ku, Tokyo), people set up a bronze statue of Hachiko and Dr. Ueno Saburo (about 1.9 meters high). After the lights at night, the shadows appearing in the lights look like Hachiko is happily rushing to the master.

Later, the story of the Hachiko was also made into the movie "Faithful Hachiko", and the station where the statue is located is now called "Hachiko", which has become a warm landmark.

The bronze statue of Hachiko in front of Shibuya Station is the best place for people to wait for friends. Everyday, ahead in front of the Hachiko Statue, a considerable number of them are waiting for lovers, like Hachiko.

How to get to Hachiko Statue?