Customs and Rituals in Cambodia

There are more than 20 ethnic groups in Cambodia. The Khmer is the main ethnic group, accounting for 80% of the total population. Khmer is a common language and an official language with both English and French in Cambodia. Buddhism is a state religion, and more than 93% of residents believe in Buddhism. There are many rituals and taboos in Cambodia that you should know.

Khmer people will never say No to the others. When you say hello to them, they will have a double hand to show their respect. Even if they pass by, they will give you a warm smile without reservation. This kind of slow life is being lived at all levels and in all fields of society. Even if the tourists are in a hurry, they will continue to rush, which will only cause them to be in a hurry or even slower. The Cambodian character is very friendly. But you need to be alert when traveling in Cambodia to determine if the driver knows where you are going. They are always full of promises, and then look south. You must not blame them for this situation, because they really don't know, they are always used to saying Yes. 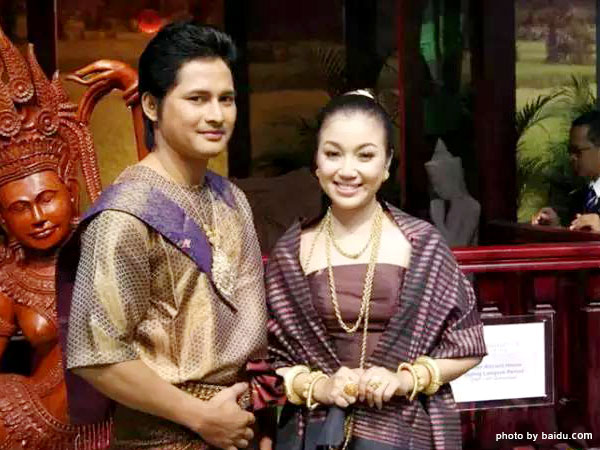 Because of its location in the tropics, Cambodian clothing is very thin. Their national casual clothes are that men wear straight-collared tops and coats. When the weather is hot, they don’t wear tops and only wear “Sarong”. The "sarong" is stitched on both sides of a cloth with a variety of beautiful patterns printed on it, surrounded by a waist and shaped like a skirt. Women's casual tops are mostly silk-necked, short-sleeved shirts, and the lower body is also wearing a " Sarong ". Usually they are wrapped in a long cloth with a beautiful pattern on their waist. 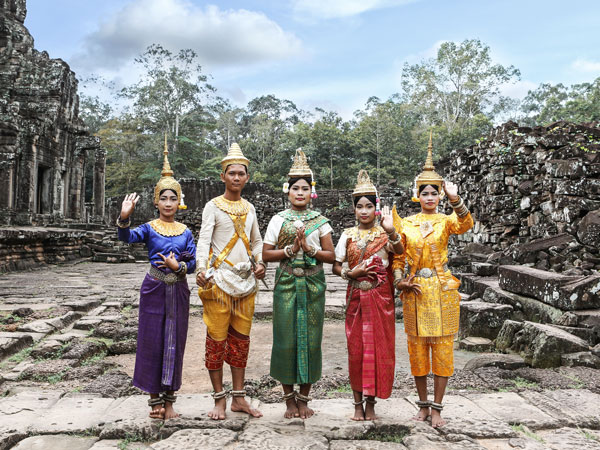 Cambodians believe that the left hand is unclean, and it is not polite to take things or food with the left hand. They also think that the head is the sacred part of the person, so others can't touch their heads, and they can't touch the child's head at will. Visitors need to pay special attention to respecting monks. Women are not allowed to contact monks. In some dances of Cambodia, gestures are often used to express specific meanings, such as five fingers close together to express "victory". Five fingers smash into fists to express "discontent" and "anger". The four fingers are close together and the thumb bends to the palm of the hand are indicating "surprise" and "sadness." 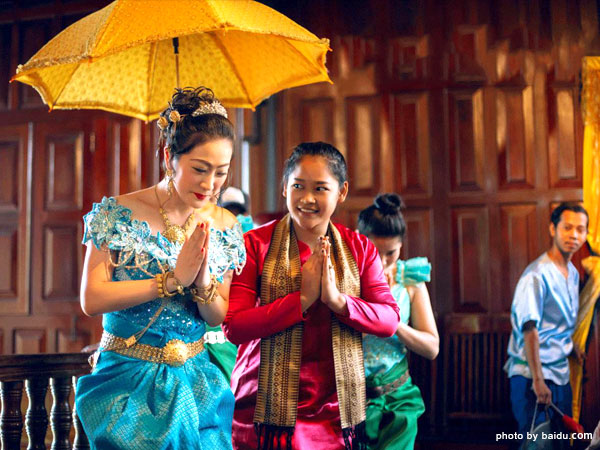 The Cambodian surname is in the front and the name is in the back. The names of the nobility and the civilians are different: the aristocrats generally inherit the father’s surname, and the civilians generally have the surname of the father. Aristocrats are very particular about their names, often with profound meanings. Most of the names of civilians are casually called, and they have no meaning. Cambodians usually do not call their surnames, just call them, and add an article before the name to show gender, longevity, and respect. For example, "A" means children; "Da" means grandfather; "Ning" means girl; "Lok" means Mr. Namaste is the most common kind of etiquette in Cambodia. When you are saluting, you must grasp the height of the palm of your hand according to the object. For example, if a woman presents to a parent, a grandson to a grandparent, or a student salutes a teacher, the palm of the hand should be lifted to the eyebrow. When the lower-level government officials salute the upper-level government officials, they should raise their hands to the mouth. When the status is equal, the hands should be lifted to the tip of the nose. In the countryside, people do Namaste. In the city, people do Namaste and handshake. 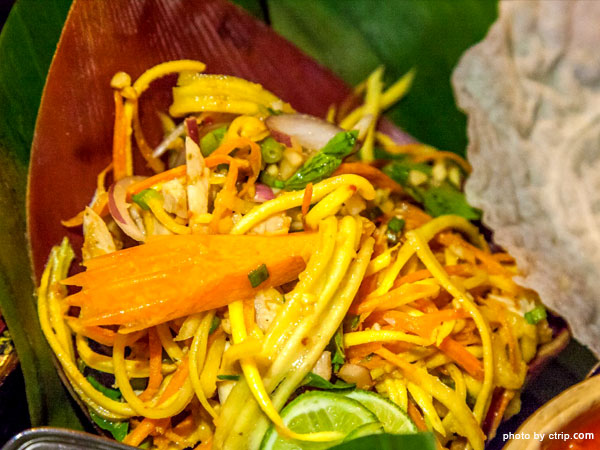 Cambodians eat rice as a staple food and like vegetarian food. However, on the holidays, their dishes are still full of fish and meat. The dishes are very rich. They prefer spicy, sweet, sour taste, pepper, onion and ginger. Garlic is an indispensable seasoning. They appreciate Chinese Cantonese and Yunnan cuisine. Drinking is more common, and fruit can also be used as a drink. They have the habit of gargle after dinner. 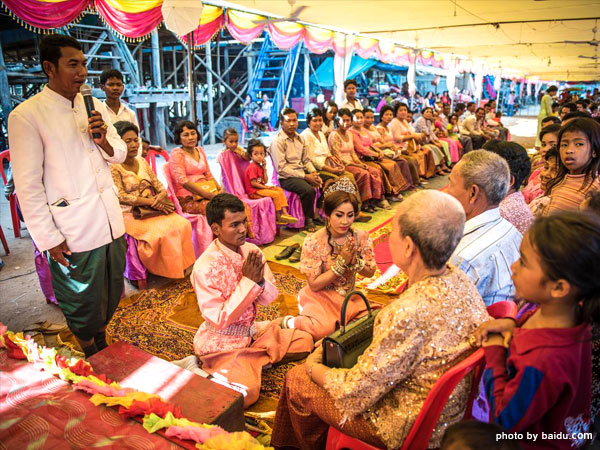 Cambodia is located in the tropics. Men and women develop earlier. Generally, women are married around 16 years old and men are married around 20 years old. Before the wedding, both men and women should dress up beautifully. Accompanied by the parents and two witnesses, they will go to the relevant government departments to register their marriage and receive a marriage certificate. According to local customs, all weddings are held at the woman’s house. After marriage, the husband usually settles with his wife in wife’s house. Traditional weddings usually take three days. The ceremony is usually hosted by an old man who chooses “good day”. Nowadays, weddings are usually simple, urban residents and intellectual families use modern wedding forms to hold a variety of civilized weddings according to their own wishes.

In Cambodia, there are many festivals throughout the year, including New Year's Day, Water Festival, Kite Festival, Fasting Festival, Rainy Season, etc. The Water Festival is the most grand traditional festival in Cambodia.

After the death of Cambodians, there are celestial burials, water burials, cremations, and burials. Nowadays, cremation is mainly used. After the death of the family, the family usually inserts a crocodile flag in front of the house to indicate the dead in the family. When you are buried, your relatives and friends will wear white filial piety. The cremation time is usually arranged at night. 3 days after the cremation, the children and grandchildren take back the urns and offer them at home, or build urns in the temple to bury them.

Rituals for tourists in Cambodia

Cambodians are very religious in their belief in Buddhism. Not only are the monks sacred and inviolable, but they are not allowed to make irresponsible remarks about their religious practices. Otherwise, you will be considered "sinful."

During the tour, if you are a guest at a local family, don't bring your shoes into the door.

Most of the rural houses are high-rise bamboo and wood structures. The floor is about two meters from the ground. When going up and down the stairs, an escalator is needed. Before taking the ladder, you should take off your shoes and put them under the ladder. Otherwise, it is impolite.

Cambodians believe that both cattle and buffalo are protected by the gods of the guardian animals, and once they are harmed, they will be retributive.

Saturday is a day that ghosts and demons like, and it is unlucky. Be careful when doing things or going out on this day.

In a room, where children can't sleep higher than their parents' beds.

Cambodians are afraid to hang their pants above others' heads.

Cambodia's hierarchy and social status are very strong. You will meet some people who ask you some personal questions. In fact, they are not interested in asking questions, but are determining your identity and status.

In business situations, shaking hands has become a standard way, but don't hold it too tightly, which can be mistaken for offense. It is their habit for women to take the initiative to shake hands or get involved. Don't have too much eye contact between men and women. When using a right hand or both hands when exchanging business cards, the action when accepting a business card will show how much you respect this person.

If you are invited to a guest's home, it is polite to bring some small gifts such as sugar, flowers, fruits and pastries. Gifts should be wrapped in colored paper, but don't use white paper, because white means mourning. Do not open it immediately after receiving the gift.

Punctuality is important because it shows your respect for the people who you see.

The foot is considered to be the lowest part of the body. Do not touch anything with your foot or point it.

When dining, the elderly usually have to sit in the first place and eat more than others. So you have to wait until the seniors start eating before that you can start eating. Communicative situations usually do not talk about business issues. If you don't know what to do, follow the guidance of others. 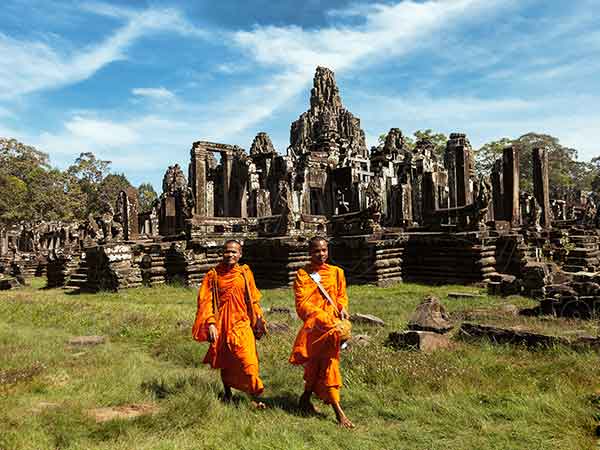