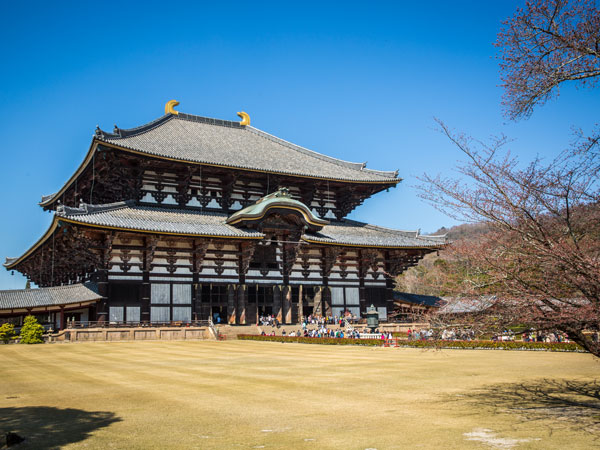 Todai-ji Temple serves as the Japanese headquarters of the Kegon school of Buddhism. It is also known as Kinkomyoshiteno Gokokuno-tera Temple. Todaiji Temple is located in the east of Nara. It was once one of the powerful Seven Great Temples. It has a history about 1,200 years old. Todaiji Temple was listed as UNESCO World Heritage Site as one of the "Historic Monuments of Ancient Nara" in 1998.

In the 728 years of the Nara period (710-794), a monastery called Kinshosanji was built by Emperor Shōmu to mourn his first Prince Motoi called Motoishino who died before his 1st birthday. After, the temple became the Yamatookuni Konkomyoji Temple, which is the predecessor of Todaiji temple.

In 743, the emperor emerged the idea of building the "Todaijirushanabutsuzo" in Todaiji temple. The construction work was completed in 749. At the same time, the Great Buddha Hall was also built. But in 855, the head of the Big Buddha fell to the ground due to a great earthquake. Although it has been repaired, the temple was burned in 1180 by the army of the military commander Taira no Shigehara. In Kamakura Era(1185-1333), the temple was revived. In 1567, many monasteries were once again burnt down by the war of Miyoshi-Matsunaga. The work repaired during the Period 1467–1590 was particularly difficult and only basic maintenance was done. In the Edo period (1603-1868), the monk called Kokei held the opening ceremony for the Buddha in 1692 and the offering ceremony of the Great Buddha Hall in 1709. In Meiji Period and Showa Period, two major restorations was made at the Great Buddha Hall.

The Great Buddha Temple of Todaiji temple has a front width of 57 meters and a depth of 50 meters. It is the largest wooden building in the world. Inside the Great Buddha Hall, there is a large Buddha statue that is more than 15 meters high - Todaijirushanabutsuzo. This hall a must-see attraction in Todaiji temple.

Todaiji temple has many features including the largest temple gate in Japan, the amazing group of Buddha statues and the hall of the "Nigatsu-do". Next to the hall, there is a large pillar and a large gate. It is said that people who come to visit the shrine will be lucky in that year if they pass through the gate, so don't forget to try it when you visit the temple.

How to get Todaiji temple?

In the Todai-ji Temple, you can see the deer that you can see everywhere. This has become one of the most loved scenery for tourists. These deer look as herbivores and seemingly gentle. In fact, they are a bit aggressive. When feeding deer, be sure to pay attention to your own safety and avoid being injured or kicked or bitten by deer.