Pak Ou Caves is located in the cliffs on the Mekong River, 25 kilometers to the north of Luang Prabang, Laos. Pak Ou Caves is composed of two caves. The lower cave is on the mountainside, called Tham Ting. And the upper cave is on the top of the mountain, called Tham Phoum. Pak Ou Caves were built centuries ago. They were buried by the collapsed mud and stones due to geological movements and rain erosion. They were later discovered by a foreign tourist, and rebuilt by the local people. There are thousands of Buddha statues in various styles and sizes enshrined in the two caves now. It is said that there are more than 8,000 in the register (many others are not registered), so it is also called "Thousand Buddha Caves".

In addition, Pak Ou Caves used to be the place where the king prayed for rain. Before the rainy season comes, a grand rain praying ceremony will be held here to pray for rain and pray for good weather.

Tham Ting, which can be seen by natural light, is best visited in the morning, as the cave faces east. It is very dark inside Tham Phoum, so tourists must use a flashlight to see inside the cave. Flashlight can be rented at the entrance of the caves if you do not have your own. 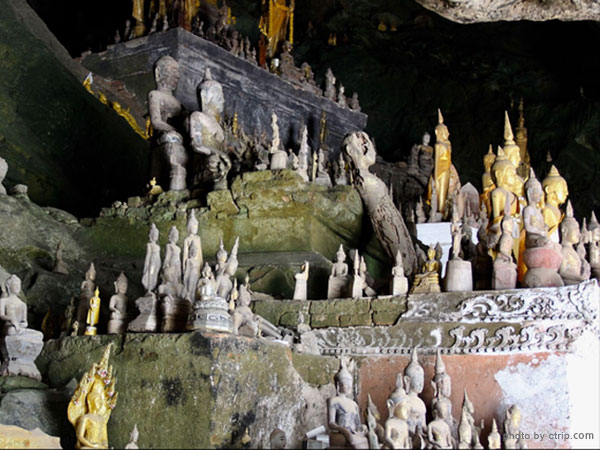 What to See in Pak Ou Caves

The highlights to see when you visit to Pak Ou Caves is Tham Ting (lower cave), Tham Phoum (upper cave), as well as the villages on the way, such as Pak Ou Village and Ban Xang Hai Village (Whiskey Village).

The mouth of the lower cave is a prominent landmark visible from the Mekong River. Tham Ting (Lower Cave) is just a short climb from the pier of the boat landing. After you disembark the boat, visitors will walk along the pathway to reach the Lower Cave. The first thing that comes into your eyes is the altar, where there are offerings of flowers, incense sticks and candles. At the entry, there are Lion figures on both sides guarding this place.

There are approximately 4,000 sculptures placed in the Tam Ting by worshippers. They are made of different materials and modeled in different shapes. Some are carved from animal horns or made from bronze or a low-fired ceramic. Most of them are carved from wood or moulded from a tree resin, then coated with red or black lacquer, and then covered with gold leaf.

A small spring in the cave supplies holy water, which is usually used during the annual New Year ceremony.

Along the way up to the cave, vendors sell flowers, incense sticks and candles to pay respect to the Buddha statues.

Tham Phoum (Upper Cave) is at about 60 meters above the river, and is 54 meters deep. After you get out from the Tham Ting, you climb up the steps, and then you will see a signage pointing to the Tham Phoum. Tham Phoum is bigger and less crowded than Tham Ting. Contrary to the well-lit Tham Ting, Tham Phoum is almost completely dark inside. Visitors need a torch to be able to see more inside the cave, or you can tag along with someone who has a torch. The Buddha statues are made of wood, resin, earthenware, or animal bones. They are then painted in mainly red and black and covered with gold.

Ban Pak Ou is located opposite the lower cave across the river. People usually take a boat from here to the Pak Ou Caves on the other bank. So tourists passingly visit this village when they get there. The wat (temple) in the village is a must-see site. In the old times, this wat was sponsored by the royal family in exchange for caring for the Pak Ou Caves.

If you go in the farming season, you can go to the back of the village to see paddy fields. Small shops sell sweets, bottled drinks and other things. The Department of Tourism has erected a large rest house for day use by parties of visitors.

Ban Xang Hai, also known as Whiskey Village, is the most visited village on the way to Pak Ou Caves, especially when you go there by boat. This village is not a destination on its own. It is just a good stop if you are on your way to the Pak Ou Caves (about halfway). Lao Lao is a famous local specialty in this village. Lao Lao is a kind of rice wine, which contains about 40% alcohol with sometimes snakes, scorpions, or other animals added to the bottle, as this is said to be good for health. You can buy a bottle of it if you are interested. Or you just have a wander around the village and then leave.

How to Get to Pak Ou Caves

There are many ways for tourists to get to Pak Ou Caves.

In addition, you can also book a one-day trip to Pak Ou Caves through a travel agency and pay a fee of around 50,000 kips. The day trip usually includes a round-way transfer to and from the hotel, as well as the entrance ticket to the caves.

♦ Respect this place of worship;

♦ Do not touch the sculptures;

♦ Please walk quietly on the pathways;

♦ Keep off the platforms;

♦ Do not smoke or discard rubbish;

♦ It is illegal to export sculptures of Buddha out of Lao PDR;

♦ Make sure you take a powerful torch with you so as to see the Buddha statues clearly in the upper cave. If you do not have your own torch, you can rent one at the entrance of the caves.