Wat Mai is one of the most famous temples in Luang Prabang. And it is the largest and most richly decorated temple in this city. Wat Mai is located near the Royal Palace Museum. It is a good representation of Laotian culture and the introduction of the Laotian lifestyle with historical background. This temple was originally built in 1821 by King Manthathourath, and used to be the residence of the supreme of Laos Buddhist monk before they moved to Wat Aham. 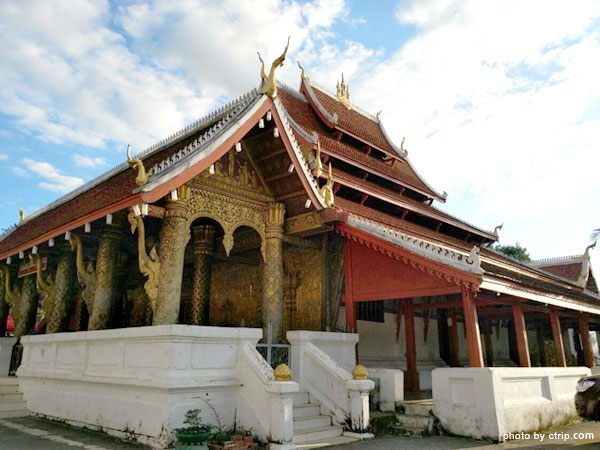 What to See in Wat Mai

The architectural style of Wat Mai is quite special. The roof is a typical five-tiered wooden structure building in Luang Prabang, but the cloister usually built next to it is built on the position of the gable, which is very unusual. The original structure of Wat Mai was once largely destroyed by the Haw gangs. Most of the buildings except the main hall were rebuilt at a later time. The narthex of the temple has beautifully decorated columns and ornate gold-plated relief walls.

The most fascinating thing is the golden wood carving murals on the gate and walls of the temple, and there is the entire Indian epic "Ramayana" on it. The relief narrates the life of Shakyamuni Buddha and the story of Jupiter Pluvius of Laos, as well as scenes from rural life, the Ramayana and Buddha's penultimate birth. Spending some time in the temple reading "Ramayana" in the early morning or evening (avoid when it is the hottest during the day), you will be like going back in time to ancient India and witnessing the epic years. In the middle of the main hall, it is a large golden Buddha, and on the left is the famous Emerald Buddha statue.

How to Get to Wat Mai

You can get to this temple on foot, by bike or by Tuk Tuk.

Do's and Don'ts in Wat Mai

♦ Do not break any antique, or you will be fine.

♦ Avoid touching any of the relics unless you are invited to do so.

♦ Before entering the temple, visitors need to have yourselves covered from knees to arms, and take off your hats and shoes.

♦ Do not have public displays of affection or intimate movements in the temple.

♦ Show respect to the novices and monks. Women are not allowed to touch them.

♦ A respectful silence should be maintained throughout your visit.