Wat Visoun, also known as Wat Wisunarat, was originally built in 1512 by King Visounnarath (who ruled Laos from 1501 until 1520). It is the oldest temple in Luang Prabang. Keep reading to know more about Wat Visoun.

Wat Visoun is a celebration of early Lao architecture. In 1887, a group of bandits known as the Black Haw riders fired and burned this old temple with wood structure. When it was rebuilt in 1896, it was built as what it looked like before as much as possible, but it gave up using wooden structure again. It changed to use the stucco and brick structure. Although it looks like to lose a lot of primitive simplicity, there is still a lot of quaint taste. From the lintel of the door or the roof eaves, you can still feel the original elegance of the temple. In the main hall with a high ceiling, there are many wooden statues of praying for rain and the altar of Luang Prabang from the 15th to the 16th century. When this temple was restored, it integrated into many Indian and Khmer elements. This makes the altars look different from the traditional Lao style. 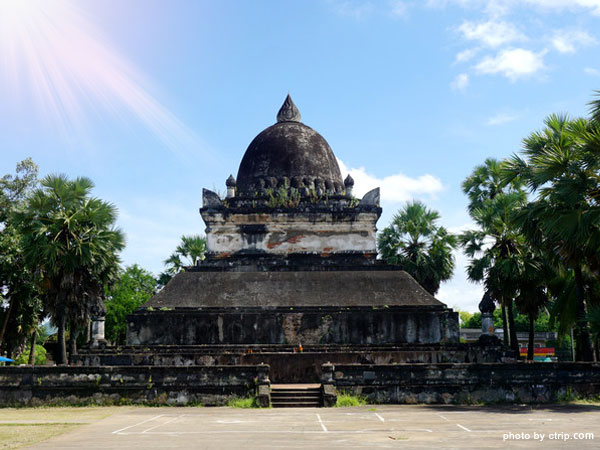 The Wat Visoun is Luang Prabang's oldest temple. It was originally built on a rice field in 1512 during the reign of King Visounnarath Thibath (aka 'Sir Phou Phay'). The temple is named after the King's name. Legend has it that no less than 4,000 trees were used for the construction of the temple. The That Pathum (aka "That Makmo") is a large Singhalese style stupa located in the northeast corner of the temple ground, commissioned by Queen Phan Tee Xieng (King Visounharath's wife). To the north of the Sim, there is a Hokong and a Hochek. The Kuti (monks' residence) of the oldest monk is on the west side and the Kadi of the monk on the southwest. The most venerated Buddha image in Laos, the Prabang Buddha statue, was enshrined in Wat Visoun twice, from 1513 until 1715, and from 1839 until 1894.

The temple was burned down in 1887 when Luang Prabang was largely destroyed and looted by the Black Haw riders. Many of the small Buddha statues were stolen. After the invasion, it was rebuilt by King Khamsouk Sakkarin in 1896. Then it was restored again by Luang Prabang Provincial Information, Culture and Tourism Department between 1993 and 2016.

Wat Visoun's main hall (Sim) is a timber and masonry structure. The structure has double roofs. The building is decorated with beautiful stucco, brick carvings and golden stencil paintings on a black background on the interior walls. The roof ridges are adorned with Naga finials. At the center of the roof ridge, there is a "Dok Soy Saa", an ornamental element consisting of 17 miniature stupas covered by parasols. The wooden doors of the Sim are believed to be the original early 16th-century structure. The delicate gilded carvings on the doors depict the Hindu God Vishnu. The porch is covered by a separate roof supported by large white pillars. The wooden balustrades on the windows are similar to those in stone at several of the Khmer temples of Angkor and the Wat Phou Temple in the south of Laos.

The Sim houses the largest Buddha image of Luang Prabang, which is 5 meters wide and 64 centimeters high. It also houses an important collection of richly gilded bronze and wooden Buddha images, many of which are up to 400 years old, and some ancient stones dating back to the 15th century.

What to See in Wat Visoun

The temple is home to a small selection of richly gilded Buddha statues and ancient stones dating back to the 15th century. The famous Pha Bang Buddha statue was once stored in this ancient temple twice. In front of the main hall of the temple stands a 34-meter-high Stupa of the Great Lotus (or the That Pathum). Because of its appearance resembling a watermelon, the locals also call it a watermelon stupa. The stupa was built by the queen in 1903. The legend has that this stupa corresponds to the Golden Temple of Pha That Luang in Vientiane. The Golden Temple of Pha That Luang in Vientiane symbolizes males, while the Stupa of the Great Lotus symbolizes females. The crystal and golden Buddha statues originally contained in the stupa have now been placed in the Royal Palace Museum.

According to the local legend, the That Pathum, or the Stupa of the Great Lotus, was built in 1514 by Queen Phan Tee Xieng (King Visounnarath's wife). It was built for covering the pond named Nong Xua. The 35-meter high stupa is in Singhalese style, the only one of its kind in Laos. The stupa is also known as That Mak Mo, which means "Watermelon Stupa", because of the dome at the top that resembles a watermelon. The stupa sits on top of a square platform. On each of its four corners, there is a lotus pedestal. When the stupa collapsed in 1917, many gold, bronze, crystal, iron and wooden Buddha images from the 15th and 16th centuries were discovered in the crypt by Chao Kom Khoun Duang Chanh and the local people. Later in 1932, the stupa was rebuilt with the support of Chao Kom Khoun Duang Chanh together with the government officers and the local people. Some of the precious images that were discovered are kept in the crypt, and the rest of them are now on display in the Luang Prabang National Museum.

How to Get to Wat Visoun

Wat Visoun is located in Wisunarat Road, where is closed to the city center of Luang Prabang. You can get to this temple on foot, by bike or by Tuk Tuk.

Do's and Don'ts in Wat Visoun

♦ Do not break any antique, or you will be fine.

♦ Avoid touching any of the relics unless you are invited to do so.

♦ Before entering the temple, visitors need to have yourselves covered from knees to arms, and take off your hats and shoes.

♦ Do not have public displays of affection or intimate movements in the temple.

♦ Show respect to the novices and monks. Women are not allowed to touch them.

♦A respectful silence should be maintained throughout your visit.