Mt. Huashan was called Western Mountain in ancient times, also known as Taihua Mountain. Steepness is the main characteristic of Mt. Huashan which is well-known as "the most precipitous mountain in the world". Hikers also call it as the most dangerous mountain around the world. It's not only one of the top 5 great mountains in China, but also the cradles of Chinese civilization. Mt. Huashan is a Taoist sacred site. There are 72 half- suspended caves and more than 20 Taoist temples. 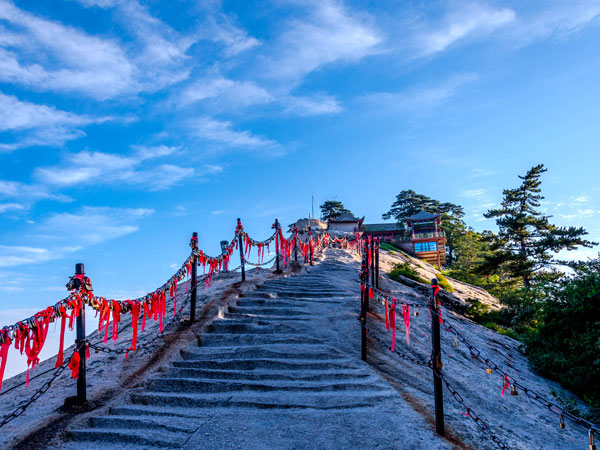 There are five main peaks in Mt. Huashan. East Peak, West Peak and South Peak are much higher than other peaks.

With the altitude of 1,614 meters, North Peak is one of the main peaks of Mt. Huashan, which is named after its location. North Peak is flat like a terrace on the cloud. In the middle of North Peak, the trees are verdant with pleasant scenery where is a great place to rest on the way. Cable car opened in 1996 to the east of North Peak. There are many attractions in North Peak, including Zhenwu Temple, Jiaogong Stone Chamber, Changchun Stone Chamber, Jade Maiden Window, Immortal Cliff, and so on. All of these attractions have a beautiful legend.

West Peak is a completely natural boulder. The east and west sides of West Peak look like lotus, so West Peak is well-known as the most beautiful peak of Mt. Huashan. With the characteristics of steepness and cragginess, West Peak is treated as the representative of the shape of Mt. Huashan. There is a ridge of West Peak that connects with South Peak. With a length of more than 300 meters, this ridge looks like a shrunken dragon. People call it Shrunken Ridge or Small Black Dragon Ridge which is one of the famously dangerous roads of Mt. Huashan.

South Peak is the highest peak in Mt. Huashan with an altitude of 2,154.9 meters. Ancient people called South Peak "the head of Mt. Huashan". On the side of South Peak, it's a vertical cliff in the thousands of feet that stands like a sharp knife. Besides, under the boulder, it's a fault-tectonic gully that looks very dangerous and breath-taking. A story goes that gooses fall on South Peak to take a rest when they fly back to the north. That's why it's called "Falling Goose Peak".

There is a platform on East Peak which is very high and precipitous. It also has a good view, so East Peak is the best place to watch the sunrise in the early morning. East Peak consists of four peak heads and more than ten scenic spots. There are natural stone lines on the precipice of Stone Building Peak, which looks like a huge handprint. This handprint was listed as one of the top eight sceneries in the Guanzhong area.

With the altitude of 1,614 meters, Middle Peak lies in the center of East Peak, West Peak and South Peak. Middle Peak is full of luxuriant trees, all kinds of exotic flowers and rare herbs on Middle Peak. There is a Jade Maiden Temple on the top. The legend tells that during the Spring and Autumn period (770–476 B.C.), Qin Mugong's daughter, Nong Yu, cultivated her mind in Middle Peak, so Middle Peak was so-called as Jade Maiden Peak.

There are more than 120 scenic spots in Mt. Huashan. Numerous literary scholars were attracted to Mt. Huashan down the ages and they left a great number of classic poems. 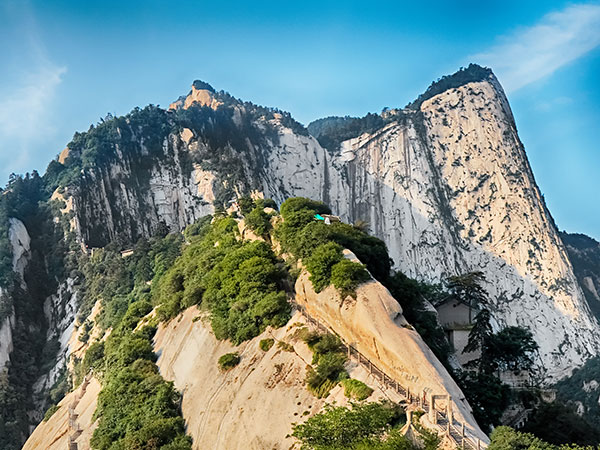 Changkong Walkway is one of the famous attractions of Mt. Huashan which is extremely narrow and thrilling. Changkong Walkway, built by the Taoist priest in the Yuan dynasty, He Zhidao, which is located in the mountainside of South Peak. In order to get away from the hectic world and cultivate the mind, he inlaid stones along the cliff and covered wooden planks.  If visitors would like to walk through here, they must place themselves against the wall and grasp the chain with their feet firmly on the wooden planks.  Then move forward slowly.

The steps of Black Dragon Ridge are only two feet in width and both sides are deep gullies. The vertical cliff looks like which it is cut by a knife and chopped by an ax. The level difference of the ridge is about 500 meters and the slope is more than 45 degrees. Standing here to enjoy and beautiful scenery with the blowing wind. How the scene breathtaking in the horror!

Hua Shan valley, also named Hua valley, includes all attractions along the road down the ages. Linking them up is so-called "only one road leads to Mt. Huashan".

The period from April to October is the peak season of Mt. Huashan. The fifteenth day of the third lunar month is the pilgrimage day of Mt. Huashan. On this day, there are grand temple fairs and celebration activities.

The sunrise time of Mt. Huashan:

How to Get to Mt. Huashan

• There are a number of steps on the mountain road, you'd better wear sports shoes. If possible, you can take gloves, stockings, crutch, etc. Or you can hire a garment on the sun-watching platform.

• Take a flashlight at night.

• Have some high-calorie food before climbing up Mt. Huashan to increase energy.

• Don't take heavy luggage since you will walk a lot up the steep mountain.

• Tips for regular drugs: You can take some medicine for carsickness and colds, painkillers, Band-Aid, etc.