Hanyang Mausoleum is the cemetery of the emperor of the Western Han Dynasty and his queen, which was built in 153 BC. It took 28 years to complete this project. In 1963, Hanyang Mausoleum was announced as the first batch of key cultural relics protection units in Shanxi province. 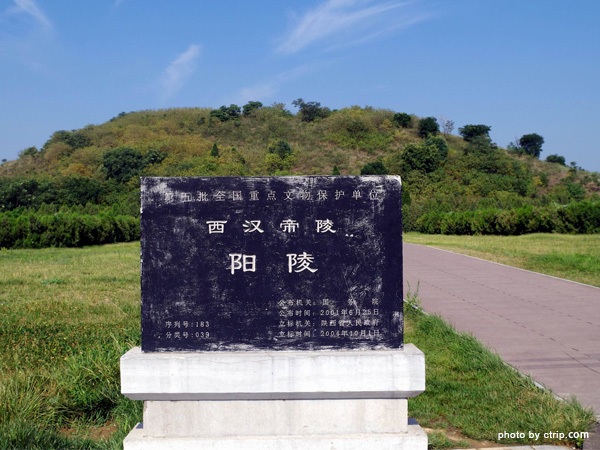 Emperor Jing, also called Liu Qi, was the fourth emperor in the Western Han Dynasty. In 141BC, He died in Weiyang palace of Chang'an city.  During the period of Qianlong dynasty, the governor of Shanxi province, Bi Ruan, established a monument for Hanyang Mausoleum. The architectonic arrangement of Hanyang Mausoleum centered on the emperor's mausoleum and well protected surrounding barriers. The whole layout is north-south symmetry and east-west connection, which shows a royal sense of exclusiveness and the strict hierarchical concept of emperors in ancient China.

The Structure of Hanyang Mausoleum

Hanyang Mausoleum consists of the emperor's mausoleum (Diling), the queen's mausoleum (Houling), attendants' tombs, prisoners' tombs, temples and a serial of ritual architectures, which covers an area of 20 square kilometers in total. This well-preserved and large-scale mausoleum provides a number of detailed physical information for studying politics, economy and cultural life of the Western Han Dynasty and plays an important role in the study of Chinese ancient architectural history. 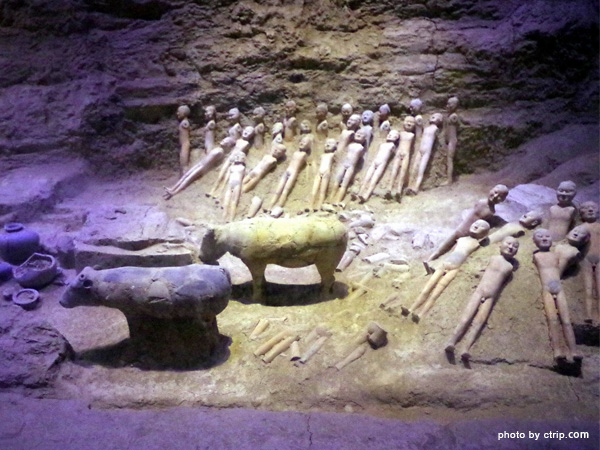 Diling is a square in shape with 166.5 meters in length, 155.4 meters in width and 31.6 meters in height. Attendants' tombs distribute radially in the periphery of the fief. All burial pits were built of wood. From the emperor's mausoleum, we can see the highest funeral rites in Western Han Dynasty. Diling is also the epitome of the social and historical activities of the feudal ruling class in the Western Han Dynasty.

Houling locates in the northern about 450 meters from Diling, which echoes with Diling. Western Han Dynasty adopted the system that the emperor and the queen were buried together in the same place but not in the same grave. The shape and structure of Houling are similar to Diling. There are 28 burial pits distributing radially in the periphery of the fief.

Hanyangling Museum is an underground museum covering an area of 7,840 square meters, which is the largest museum in China. Hanyangling Museum is a large-scale cultural tourism attraction that integrates modern technology with ancient civilization, historical culture and garden landscape. This construction is magnificent and exquisitely decorated. You can fully feel the majesty and power of the emperor.

1. Hanyang Mausoleum is the mausoleum of the Emperor Jing of the Western Han Dynasty, you are able to see thousands of various pottery figurines, including figures of warrior, palace maid, eunuch and animal.

2. Through the glass passageway and curtain wall, you can have a close look at the thousands of cultural relics in the underground museum.

3. You can participate in the simulated archaeology practice and experience the mystery of archaeology.

All year round is suitable. You can visit Hanyang Mausoleum in autumn because ginkgo tree leaves gradually turn yellow at that time which looks very attractive.

How to Get to Hanyang Mausoleum