Laos used to be called "the land of one million elephants" in the past. Today there are only about 800 elephants in this country, and the number is decreasing. The elephant in Laos is now a profoundly endangered species. Half of them are captive in the enclosures and work in the forest industry harvesting timber. But the breeders are not interested in raising animals. They only used them to work and earn money for them. As the harvesting of timber in Laos is declining and it's just a matter of time before this becomes obsolete. It is very costly and exhausted to raise an elephant, as they need tremendous amounts of food every day. When the elephants become useless, they will be abandoned by their owners. If so, these former logging elephants will live a hard life with no chance of finding enough food or water and no access to veterinary care, as they are living on the margin of urban environments.

Established in 2001, Elephant Village is trying to help these jobless elephants or abandoned elephants. The elephants in the village are rescued from an illegal environment. Here frees the elephants from cruel logging and offers them a better and easy job to earn their living. 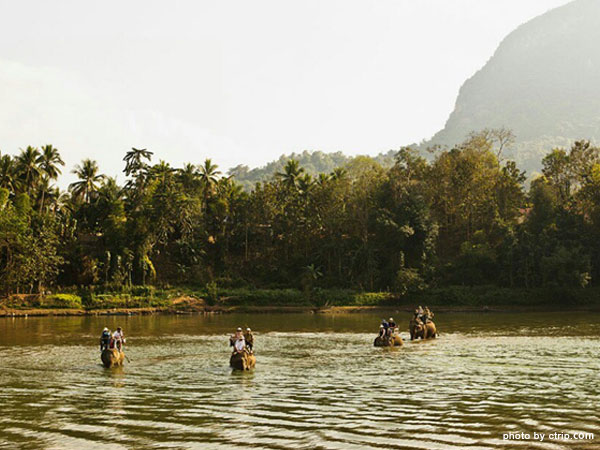 In Buddhism, the elephant is a symbol of mental strength. The revered elephant serves as a symbol of the calm majesty possessed by one who is on the path to enlightenment. During his 5oo lives, the Buddha has had various incarnations, including some as a scare white elephant. One of the most popular myths relating to the white elephant is the birth of Buddha. This myth starts one night when Queen Maya (Buddha's mother) had this dream, and a white elephant appeared. The elephant had six tusks and a lotus flower sticking out of its trunk. Appearing by Queen Maya's side, the white elephant touched her, and the Buddha was conceived. Later in his life, at the end of a long fast in the Himalayas, the monkey presented the Buddha with honey, and the elephant brought him water to help rehydrate. This helped him gain more strength and attain enlightenment (Nirvana). And when Buddha died, the first creature to come and pay tribute was he elephant.

Elephant Village was originally founded by Markus Peschke. When he was on an exploratory trip down the Nam Khan River in 2001, he started to think about founding an elephant base in the jungle, cliffs, and rivers of Ban Xieng Lom village.

In the rear of the Elephant Village, Mr. Peschke came across temple ruins. He found out that these bricks were once part of a settlement known as Baan Xang (Elephant Village). As per what was told by the local villagers, this village was built in the 1890s for the catching, training, and caring services for royal elephants of Luang Prabang, the capital of Lane Xang Kingdom.

With very short-time preparation, the Elephant Village was founded in October of 2003. An exclusive elephant trail to the Tad Sae Waterfall was created and mapped out. Such a project could be finally put into practice thanks to its founder, Markus Peschke. He was very familiar with the local tourism industry. He had owned the Indochina Spirit restaurant in the downtown of Luang Prabang, which acted as the base camp of preparation works and operations. Mr. Peschke trusted that it was a great opportunity to attract tourists for elephant riding.

At first, the base rented two elephants from the close-by Hongsa district. But it also brings some problems, as nobody rented an elephant for this purpose before. It was unsure at the time if these elephants were appropriate for tourists to have a ride. So the base began to purchase elephants on its own.

In 2015, the Elephant Village was sold to a Lao family from Vientiane, and it is now a 100% Lao owned and operated company.

The Aim of Elephant Village

The establish of Elephant Village not only aims to rescue working elephants from the tough and abusive environments in which they have to make their living but also gives them a brighter future by providing rides or mahout training courses to tourists. This is quite easy work for elephants, which allows them to earn their own living and be cared for by professional veterinarians.

In addition, Elephant Village offers a great chance for visitors to learn about these very special large animals, observe them, and spend some time with them. 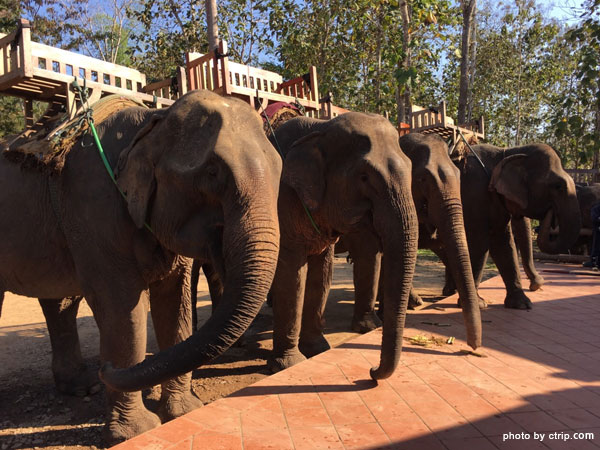 Things to Do in Elephant Village

It is suggested to take a day trip to the Elephant Village to join the basic Mahout training courses, which allows you to interact with this large animal. You will have a chance to learn how to feed elephants, take care of the elephants at elephant hospital, or make food for elephants. The staff will also teach you how to ride an elephant, and help an elephant to take a bath in the river. This is one of the most interesting hands-on experiences in the country and a rare opportunity to get close to these magnificent animals.

In addition to the elephant interaction and riding, tourists choose to trek into the amazing Lao countryside with a visit to a Khamu minority village and the magnificent Tad Sae Waterfalls with a local guide. While trekking on foot via the thick forests, visitors can enjoy the amazing views of the Nam Khan River and the surrounding magnificent hills.

►Riding an Elephant to Pass through a Jungle

If you embark on this journey, you will see the stunning scenery, majestic rivers, and hospitable villagers waiting for you. After arriving at the camp and sign for the tour, a local will warmly welcome you and introduce the activities throughout the day to you. At this point, you can ask all questions, and please be sure to listen carefully, because they will tell you some friendly tips for riding an elephant to pass through the jungle. They will also lead you to Khmu Village, where a minority of Laos lives. When you arrive at this charming little village, the villagers will warmly welcome you and tell you the moving story here. Join this journey and get in touch with the large animals in Laos. This is definitely an unforgettable experience.

In addition, you can try local Lao cuisine here. Or if you have enough time, you can also spend one night there. This village offers accommodation for tourists, allowing you to enjoy a pleasant and relaxing holiday trip.