Raj Ghat is a memorial built for the founding father of India, Mahatma Gandhi, which locates on the Jamuna River in the eastern suburbs of New Delhi. There is a black marble platform lying in the middle of the park, which marks the spot where the peace leader was cremated after his assassination in 1948. An eternal flame behind the platform burns day and night, which is a symbol of India's struggle for national independence. Every Friday, people will get together here to attend a commemorative ceremony dedicated to Mahatma Gandhi. 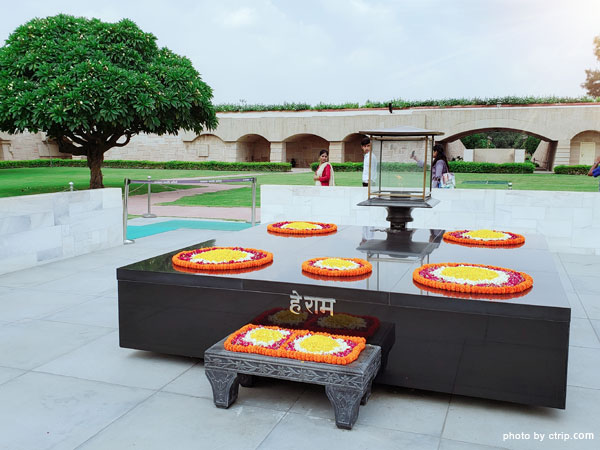 Raj Ghat is the memorial site where Gandhi was cremated after his assassination, but his body is not buried here. It's a large scale site. The memorial is simple, which was designed by Vanu G. Bhuta, who intends to reveal Mahatma Gandhi's simplicity in his life.

Foreign major leaders who pay state visits to India will visit Raj Ghat as well, paying their respect and homage by putting fresh flowers and garlands on this platform. It is worth mentioning that some visiting dignitaries planted labeled trees to pay homage to Mahatma Gandhi, including Great Britain's Queen Elizabeth II, the former United States president Dwight Eisenhower and former Vietnam chairman Ho Chi Minh.

Who is Mahatma Gandhi

Mohandas Karamchand Gandhi (Indian name: मोहनदास करमचंद गाँधी, October 2, 1869 - January 30, 1948), the founding father of India and the greatest political leader in India, also known as "Mahatma Gandhi", is the leader of the Indian Nationalist Movement and the National Congress.

India broke away from the British colonial rule and moved towards national independence under his leadership. His philosophical thinking "non-violent" has influenced nationalists around the world and those international movements striving for peaceful change.

Gandhi freed India from British rule through "non-violent" citizen non-cooperation. People in other colonies were inspired to fight for their independence. Eventually, the British Empire fell apart and replaced it with the Commonwealth. Gandhi's main belief is Satyagraha, which means "spiritual force", "the road of truth", "pursuit of truth", etc. The thought inspired other democratic movement figures such as Martin Luther King, Mandela and others. He often said that his values were simple, and developed from traditional Hindu beliefs: Truth (satya), Non-violence (ahimsa).

On January 30, 1948, Gandhi was assassinated by Hindu diehards. He is the greatest leader in Indian history and well respected by Indians, even people from other countries.

Commemorative prayer is held every Friday evening at 5:30 p.m. Leaders and citizens of other countries come here to pay homage to Gandhi on October 2 and January 30.

How to reach Raj Ghat

The Gandhi Mausoleum is opposite the Red Fort. It can be reached by bus from the city, or by subway. The nearest railway station is Old Delhi Railway Station, and the nearest airport is Indira Gandhi International Airport.

♦ Bringing food into the park is forbidden, and there is nowhere to buy food inside.

♦ All visitors must remove their footwear before entering the Raj Ghat walls. If you want to walk down to the site, you'd better wear the socks.

If you want to worship Mahatma Gandhi, it's worthy of visiting this serene and tranquil site. It is a good place to escape from the hustle and bustle of Delhi for a short while, and you can enjoy some of Gandhi's wisdom and teachings here.