When traveling to India, many people will be confused by the name of "Delhi", "New Delhi" and "Old Delhi". If you go to the India Gate in Delhi (hereinafter referred to as the "India Gate"), perhaps the confusion about the name of Delhi will be solved.

India Gate, official name Delhi Memorial, originally called All-India War Memorial, is a monumental sandstone arch in New Delhi. It located on King's Road in Delhi. It was built by British rulers in memory of 90000 Indian soldiers who lost their lives for the British Empire during the First World War (1914-1918) and soldiers who died in the war between India and Afghanistan (1919). The names of 135000 soldiers killed in the war were densely engraved in Indian Gate. With India's independence, India Gate became India's Unknown Soldier Monument.

India Gate is a memorial for soldiers, but the design is that of a triumphal arch, similar in appearance to the Arch de Triomphe in Paris, France. On the rooftop above the archway is a broad shallow domed bowl that was intended to be filled with flaming oil on ceremonial occasions. Indian Gate is 48.7 meters high and 21.3 meters wide; the middle arch is 42 meters high. The three flags inside the arch are the military flags of the Indian Army, Navy, and Air Force. 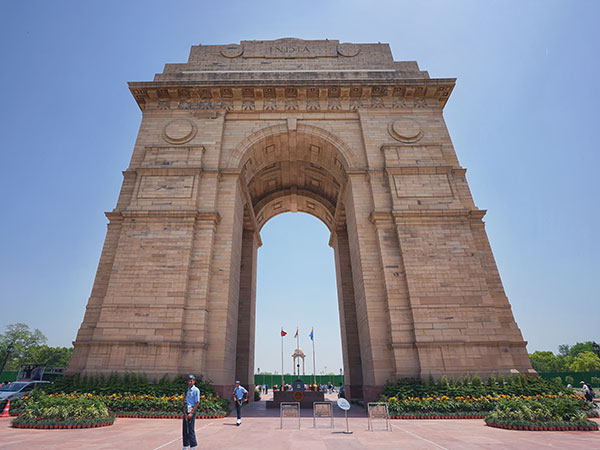 To pay homage to Indian troops who perished for the British Empire in WW1 and the Third Anglo-Afghan War, the British Imperial Mandate initiated Imperial War Graves Commission (IWGC, later renamed Commonwealth War Graves Commission). As part of IWGC, India Gate was undertaken in 1917. Sir Edwin Lutyens, a leading war memorial designer at that time, was the architect designed for India Gate. Moreover, he was also the principal planner of New Delhi. The foundation stone was laid in 1921 by the third son of Queen Victoria, Duke of Connaught. The project was completed ten years later in 1931, the year of the formal dedication of New Delhi as the capital of India.

India Gate has become a venue for the Indian government to welcome important politicians who pay state visits to India; some important rallies, parades and cultural events are also often held there. Every year on January 26th, the Republic Day parade starts from the Rashtrapati Bhavan (the President House) and progresses around the Gate.

With continuous development, New Delhi and Old Delhi have been connected without a clear dividing line. India Gate is a recognized landmark: New Delhi south of India Gate and Old Delhi north of India Gate, reality and ideals, tradition and modernity, poverty and prosperity are marked and magnified. Things change between old and new, while landmarks are witnessing by India Gate.

There is a monument under the arch of the India Gate in Delhi, also known as Amar Jawan Jyoti, which means "the flame of the immortal soldier". There is a rifle-like sculpture above the black marble monument, and soldiers stand guard beside. The changing of the guard takes place approximately every 30 minutes. The changing ceremony is very solemn and has become a reason for many tourists to come.

Many political protests also took place here, including demonstrations by the public because of the "Nirbhaya case", the bus rape and murder case prompted outrage around the world and in India. People want to pressure the government to modify the law to protect Indian women's rights and demand justice for the girl who died in this case.

India Gate is located in an open green space and surrounded by a huge round. It's a good place for local people and visitors to hang out for leisure at night. When night falls, it's lit with the Indian flag. Local people spread on the lush green grass and relax for some time to enjoy their packed dinner while kids can play around. Visitors can enjoy the atmosphere of local people's life here.

How to Reach India Gate

India gate is easily accessible from all parts of New Delhi by road and can be reached by bus, taxis and autos. As India Gate located at the heart of India's capital city, heavy traffic jams are easily happened around here. We highly recommend you take the metro there. The nearest metro station is Central Secretariat on the yellow and violet line junction.

♦ Beware of local photographers, they will shoot you, print the photo and ask you to pay.

♦ Best to visit at sunset to enjoy the atmosphere, the best time to take photos at day time if you can stand the scorching hot weather in India.

♦ After the recent blasts and terrorist activities, the place generally has many security personnel. You must follow the instructions for security.