Jama Masjid Delhi, the largest mosque in India, locates in the Northeast corner of Old Delhi. Jama Masjid was constructed in 1650–1656 during the era of the fifth Mughal emperor Shah Jahān. He went on a building spree during his reign, which was widely regarded as the "golden age" of Mughal architecture. It is one of the three largest mosques in the world with the Mecca Mosque in Saudi Arabia and the Al-Azhar Grand Mosque in Cairo, Egypt.

Jama Masjid in Arabic means "Friday mosque". As the largest and the most famous mosque in India, many Muslims will gather here for Friday communal prayer. Ceremonies will be held during the festival and Fridays. It can accommodate 25000 prayers at the same time. 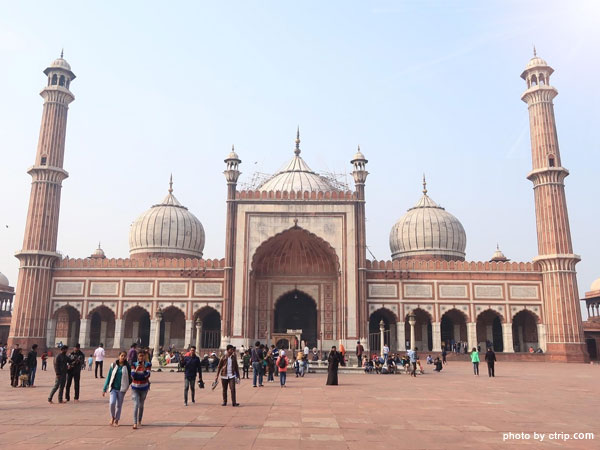 The Jama Mosque was started to build on Friday, October 19, 1650, and was completed in 1656. Shah Jahan, the fifth-generation emperor of the Mughal Empire, ordered the architect who designed the Taj Mahal and Red Fort to construct the Jama Masjid. Jama Masjid is an architecture-lover who had built the most famous buildings in India, including Taj Mahal, Red Fort, etc.

After he relocated his capital from Agra to New Delhi, he needed to replan the new city. Constructing the mosque is one of his plans. It took more than 5,000 craftsmen to build this mosque, and it took 7 years to build.

Jama Mosque is an impressive example of Mughal architecture. The principal construction material was red sandstone, but some white marble was also be used.

On the high platform of the rocky hill, two minarets and white Islamic domes shine in the sun. The Jama Mosque is a miracle in architecture. The entire building is completely wood-free, and the ground, ceiling and walls are all finely polished. The carved white stone is caulked with lead water and is strong and indestructible. More than 30 wide and flat stone steps from the ground to the gate are made of red sandstone.

The whole temple is 75.5 meters long and 24 meters wide, with an area of 1170 square meters. There are three grand gates in the mosque, of which the east gate is dedicated to the emperor, and is magnificently constructed. Now Gate 1 (south gate), Gate 2 (east gate), and Gate 3 (north gate) are accessible for visitors. The west gate is oriented toward the holy city of Mecca of Saudi Arabia, which is open to prayers. There is a rectangular pool in the middle of the courtyard, which is used for prayers to clean their hands and feet before worshipping.

The three white marble domes on the top of the temple are decorated with gold-plated round nails and black marble stripes, and the minaret in the center of the dome is copper. On each side of the mosque, there is a minaret stacked with red sandstone and white marble. The minarets have three floors, each with balconies and halls. There are also spacious alcoves in the hall, where the dean stands for worship. The 130 steps in the tower lead to the top of the tower. Looking at the distance from the white octagonal gazebo at the top, you will see the panoramic view of Old Delhi.

The Red Fort is around Jama Masjid. It's one of the most important ancient forts in India. Most tourists will visit the Red Fort together with Jama Masjid within a day. As the Red fort and Agra Fort are similar, we suggest you visit one of them.

Kushti, a traditional Indian wrestling match, will be held at Urdu Park. If you visit Jama Mosque on a Sunday afternoon, you can come to Urdu Park to see it. It starts at 4:00p.m.

What should you pay attention to?

♦ The entrance fee is free, but if you want to climb up the minaret, you need to pay an extra 100 rupees.

♦ Anyone who takes a camera or camera-enabled mobile phone has to pay 300 rupees.

♦ There are disordered traffic and some beggars and small businessmen in front of the Jama Mosque. Special attention needs to be paid to personal safety and property safety.

How to reach Jama Mosque

Take the yellow line of the metro, get off at Chawri Bazar Station, exit from Exit 3, walk for 10-15 minutes or take an E-rickshaw to reach Jama Mosque.