Humayun's Tomb is built for the second emperor of the Mughal Dynasty, Humayun (ruled 1530-1540 and 1555-1556). It located in Delhi near the Old Fort (Purana Qila). Humayun's Tomb is an architecture that fused Islamic and Hindu architectural styles. Humayun's Mausoleum was designated as a UNESCO cultural heritage and listed on the World Heritage List. 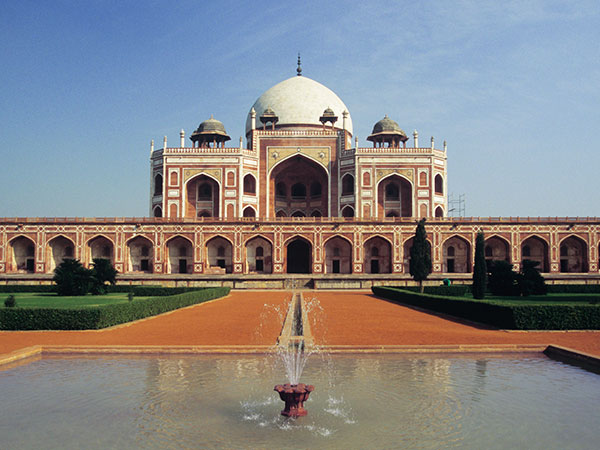 Humayun's tomb is a prominent milestone in the development of the Mughal architectural style in the Akbar era. It cleverly combines the styles of Islamic architecture and Hindu architecture, creating a new generation in the history of Islamic architecture. This complex is large in scale and complete in layout. The entire cemetery sits north to south, and it is surrounded by a red sandstone wall about 2 kilometers long. The landscape in the cemetery is beautiful, with palms and cypresses in rows and rows, grassy lawns, and fountains all over, which is actually a large garden with an elegant layout.

The mausoleum of the cemetery was built with gray stone, and it is an octagonal pavilion-style building. The surface is made of fragments of marble and red sandstone, which are inlaid into a gorgeous pattern.

The main building of the tomb is made of red sandstone. The mausoleum is square, with doors on all sides, and the dome of the tomb is semicircular. The whole building is solemn and bright, and it is a boutique in the history of architecture in India and even the world. The tombs of Humayun and the Queen are in the middle of the central palace, and the tombs of the five emperors of the Mughal dynasty are on both sides.

From the fine carving of red sandstone, the garden-like interior to the arched doors on the surrounding walls, all this constitutes a typically Mughal style. It is generally believed that Humayun's tomb is influenced by Persian art, while the ground floor plan is Indian style. It is also an Indian style that uses a lot of white marble in its appearance, without the decoration of the colorful bricks commonly used in Persian architecture. The entire tomb gave a majestic, grand and dignified feeling, sweeping the dark, gloomy style of the Islamic tomb. Obviously, it is an ingenious fusion of the simplicity of Islamic architecture and the prosperity of Hindu architecture, which makes the architecture of the entire Mughal period.

Humayun's Tomb was built by Humayun's widow Hamida Banu Begum. She patronized an architect from Persian to design the tomb. The construction of the mausoleum for her deceased husband was commenced in 1565, nine years after his death. The construction was completed in 1572.

The garden-tomb gradually houses many tombs, as well as other members of the imperial house between the 17th to the 19th century. Several following Mughal emperors were even buried inside Humayun's mausoleum. There are around 150 graves in Humayun's tomb and the surrounding garden. Since then, it was regarded as the royal mausoleum for the Mughal dynasty. Moreover, Humayun's tomb is the first garden-tomb on the Indian subcontinent.

Humayun's tomb was listed as a UNESCO World Heritage Site in 1993, and restoration was organized from 1999 to 2003. 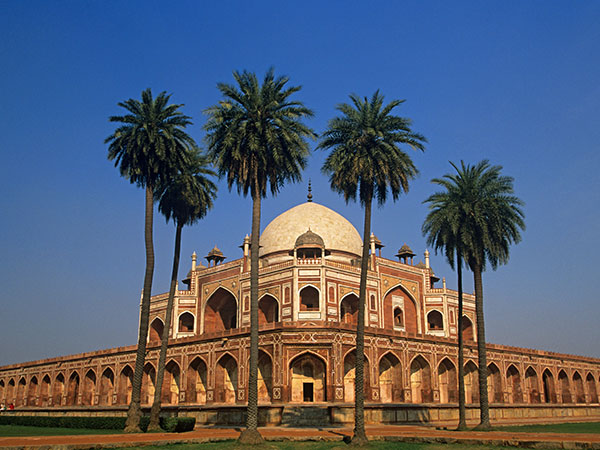 There are many attractions around Humayun's Tomb. Knowing them in advance, you will plan your visiting time more appropriately.

Foodies can choose to explore some diverse restaurants in the Nizamuddin neighborhood. No matter contemporary fine dining or traditional roadside outlets, you have a chance to try it.

Purana Qila is in the north of Humayun's Tomb. A sound and light show are holding at the monument every evening except on Fridays. You will know the history of Delhi under the reign of Prithviraj Chauhan during the 11th century.

How to reach Humayun's Tomb

♦ To avoid heavy traffic jams in India, we suggest you use the metro to Humayun's Tomb.

♦ Jor Bagh station lying on the yellow line is the nearest metro station to Humayun's Tomb, after getting off the metro, taking a tuk-tuk or taxi there.

♦ There are no shops once you get in, bring some water with you.

♦ The view is lovely once it gets dark, you'd better visit this spot when sunset coming.

Not as busy as the Taj Mahal, but just as beautiful, Humayun's Tomb is another must-visit UNESCO World Heritage site that you can't miss in your Indian trip.