Cheong Wa Dae is the official residence of the President of South Korea. It was originally the palace of the Joseon Dynasty. It was used as the back garden of the Gyeongbokgung Palace in the late Joseon Dynasty, some buildings such as Longwutang, Qingnongzhai, and Nianwuchang were built, and a king's own farmland was opened. 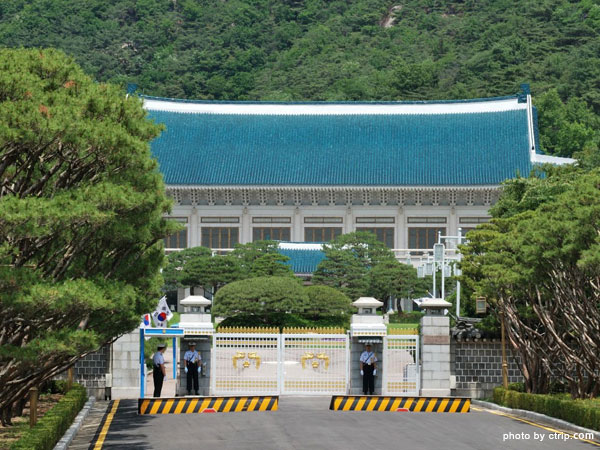 Cheong Wa Dae was built by President Lu Taiyu (노태우) while he was in office. The main building of Cheong Wa Dae is the official residence of the President of South Korea. There are also including the president's office, reception hall, meeting room, etc.

The name "Cheong Wa Dae" not only denotes a specific location but also stands for the highest authority of the Republic of Korea. Nowadays, tourists visiting South Korea will definitely not miss the opportunity to visit Cheong Wa Dae. This is a wonderful journey, and the tourists can deeply understand the history of South Korea and feel the architectural charm of Cheong Wa Dae.

Cheong Wa Dea was built in the Suzu period of Goryeo, and it was originally the palace of the Goryeo Dynasty. After the establishment of the Joseon Dynasty, it belonged to the backyard of Gyeongbokgung Palace. In 1927, the Japanese colonists destroyed all buildings except the Wuyun Pavilion in the Houyuan of Gyeongbokgung Palace, and established the residence of the Governor of North Korea. After Japan surrendered in 1945, it became the official residence of the military and political chiefs. When the Republic of Korea was established in August 1948, it became the official residence of the President and was renamed Kyung Mu Dae (경무대).

After the overthrow of the Li Chengwan (이승만) regime on April 19, 1960, Yin Pushan was elected president and was stationed in Kyung Mu Dae. In order to correspond to the White House in the United States, this group of buildings with white walls and blue tiles was named Blue House, so some people also called it "Blue House".

Since the North Korean army attacked Cheong Wa Dae in 1968 (the Cheong Wa Dae incident), the current street maps in South Korea do not indicate the location of Cheong Wa Dae. However, the official English website of Blue House has an accurate address and traffic information.

Today, South Korea's political centers gather here, symbolizing South Korea's highest political rights and becoming the official residence of the South Korean president. Cheong Wa Dea is named after the blue tiles of the main building, which is also one of its most distinctive features.

Cheong Wa Dea consists of the Main Office Building, The State Guest House, The Official Residence, Sangchunjae, Nokjiwon, Yeomingwan and Chunchugwan. It should be noted that these buildings have different appearances. In order to highlight Korean characteristics, all buildings are built according to the traditional Korean architectural model and there is no doubt that this is one of the best designs in South Korea.

The roof tiles of the main building and the curved design of the roof are the most representative places of Cheong Wa Dea. It has a total of 150,000 tiles, each of which can be used for more than 100 years. The roof has several triangular ridges, and the stable structure formed symbolizes the unity and solidarity of South Korea. The beasts arranged on the corner of the eaves also pray for peace and happiness for the people.

What to see in Cheong Wa Dea

Its name stems from Confucius's culture, symbolizing fairness and strictness. Built in 1990, the roof is a traditional Korean triangular wall roof made of clay tiles. The entire building complements the surrounding environment. Chunchugwan is also a place that the president meets international and domestic journalists.

Nokjiwon was built in 1968, which is the most beautiful place in Cheong Wa Dae. More than 120 kinds of trees were planted here, including the trees planted by previous presidents due to celebrate the festival. The most famous tree is the umbrella pine in the center of the square, which is more than 160 years old and stands about 17m tall. In ancient times, this was the place where the emperor personally cultivated in order to pray for a good harvest. In modern times, it is a place to hold some festive celebrations, such as Teachers' Day and Children's Day.

How to get to Cheong Wa Dea

Take exit 5 at Gyeongbokgung Station on subway line 3 into the Gyeongbokgung Palace grounds and walk approximately 600m toward the East Gate Parking Lot. The Cheong Wa Dae Tour Information Booth is on the ground parking lot.

Every Tuesday, Gyeongbokgung Palace is closed and exit 5 should not be used. Instead, take exit 4 at Gyeongbokgung Station and walk approximately 700m in front of the Palace toward Anguk Station and turn left at the Gyeongbokgung intersection by Dongsipjagak (the East Watch Tower). The East Gate Parking Lot is on the left side of the street, and the Cheong Wa Dae Tour Information Booth is on the ground parking lot.

Village Bus: Jongno 11 (get off at Bubryunsah Temple stop)