Located opposite the Presidential Palace, Wat Sisakhet is considered to be one of the oldest temples in Vientiane. It is not only famous for the interior walls of the cloister, but also has beautiful architecture and layout with history dated back to 1818. It is more like a feast for history and architecture lovers. It has become a must-see attraction in Vientiane. 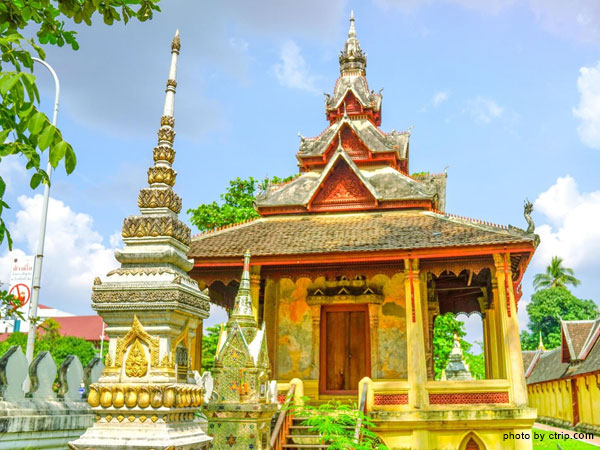 Wat Sisakhet is one of the oldest temples in Vientiane. It was built in 1818 under the order by Anouvong (1805-1828), the last king of the Lan Xang Kingdom. Anouvong, more commonly known as Chao Anou, was educated at the court of Siam in his early years. Wat Sisakhet was built with reference to the Golden Mount Temple in Thailand. At that time, the Lan Xang Kingdom was already a subordinate country of the kingdom of Siam (now known as Thailand), so this temple had the flavor of a Thai temple.

In 1828, ten years after the temple was built, Vientiane was attacked by the Kingdom of Siam. The invasion destroyed all the temples in Vientiane, except Wat Sisakhet. According to what was said at that time, there were two reasons. Firstly, this temple was built in Thai style. Because this temple looked like a Thai temple, it was spared from the Siamese army; secondly, the Thai troops were stationed here as a camp during the war. Although spared from the war, it is regrettable that most of the cultural relics were lost in the war. Most of the Buddha statues which were made when the temple was originally built were stolen and plundered by the Thais. Only one large Buddha statue, two bronze Buddha statues, and 120 small Buddha statues in the corridor are still well preserved. The original giant Buddha statue weighed more than 100,000 kilograms, so this temple was also called "One Thousand Buddha Temple" at the time. From 1924 to 1930, the French restored the temple. In the middle of the 20th century, it was established as one of the museums in Vientiane City. It collects and displays Buddha statues and cultural relics collected from all over the country. Here people can see the prosperous culture and art of Laos in the early 19th century. 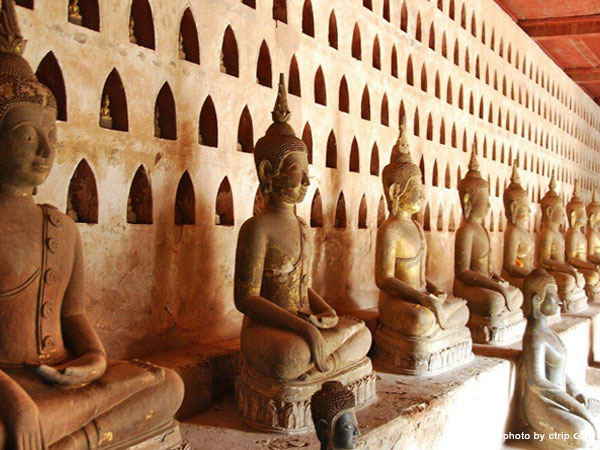 What to See in Wat Sisakhet

The Wat Sisakhet covers a large area and looks magnificent. The temple also has beautiful architecture and layout. It integrates a variety of architectural arts. Among the many interesting features, there are its lovely surrounding verandas, an ornate five-tiered roof, a drum tower, a small library building with a Burmese-style roof, and the flowered ceiling of the sim (ordination hall). The hall holds 7,000 images made from wood, stone and bronze. Now it has become a center of the collection of ancient Lao cultural art.

The roof of the temple is a 5-tiered building, which is taller than that of Xiangtong Temple in Luang Prabang. Inside the courtyard, the main hall is in the center, and it is surrounded by a courtyard wall formed by the cloister. In the outer cloister of the courtyard wall, many Buddha statues in different sizes are neatly placed there. The number is more than ten thousand, and most of them date from the 15th to the 19th century. The farthest can be traced back to 1200 years ago. The size and material (stone, gold lacquer wood carving, bronze, etc.) are different. They are all collected from all over the country after the war.

There are many small alcoves on the wall, which houses more than 2,000 silver or ceramic Buddha statues. The Buddha statues in the alcoves are in pairs. This style is only available to see in Wat Sisakhet. The newly-made Buddha statue usually has a hole in the top of its head. After the believers put the gold and silver jewelry, etc., in the hole, it will be sealed. After being chanted and blessed by an eminent monk, the Buddha will become spiritual. The heads of Buddha statues here were uncovered by the Thais during the invasion, and the jewelry inside had been looted.

At the back of the cloister, you can also find a wooden serpent-shaped trough in 5 meters long. That's used for the ceremony of washing figures of Buddha during the Lao New Year's Songkran Festival. There were many beautiful murals on the walls of the temple, describing the lives of Buddhists, which are now blurred. In addition, many coconut trees, banana trees, and mango trees are planted in the courtyard. 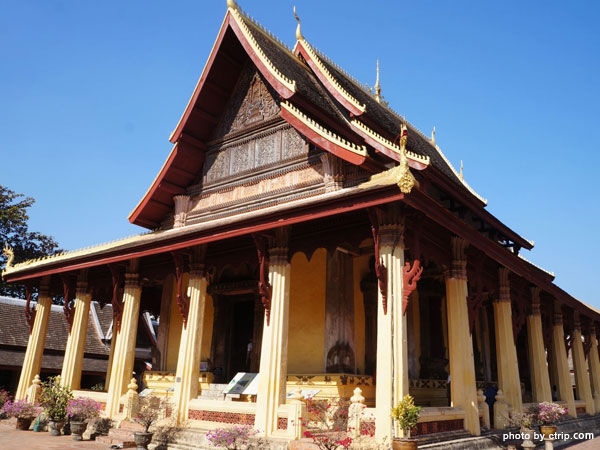 How to Get to Wat Sisakhet

Wat Sisakhet is located in the downtown of Vientiane City. Visitors can get there on foot.

Do's and Don'ts in Wat Sisakhet

♦ Visitors are required to take off your shoes and hats.

♦ Visitors need to have yourselves covered from knees to arms. Sleeveless or short sleeve shirts, short skirt and short trousers are not allowed to wear. If your dressing does not meet the requirements, you can rent a tube skirt for free at the entrance.