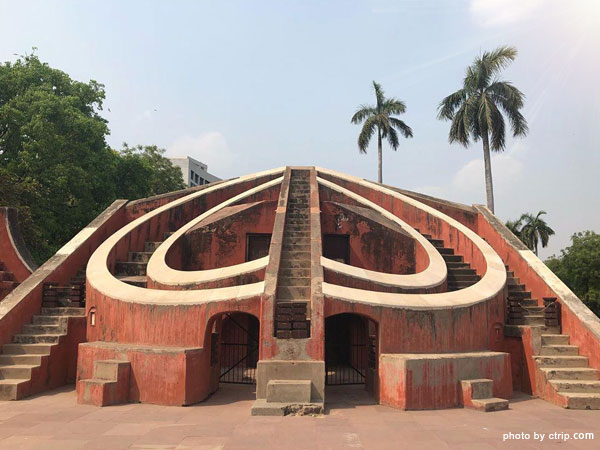 Jantar Mantar is the masterpiece of Sawai Jai Singh II, the founder of Jaipur City. Before he constructed the observatory, he went abroad to study foreign architecture. He built five Jantar Mantars in Jaipur, Delhi, Varanasi and Ujjain. The one in Jaipur is the largest. There are many bizarre giant sculptures along with the world's largest sundial on the green lawn. Each has a special purpose. The thought, science and accuracy behind each instrument are awe-inspiring. The precise observation facilities reflect the wisdom of the ancient Indian people.

Jantar Manta is one of the best-preserved places where various observation instruments can be used by astronomers. The construction and observing instruments of the observatory show the incredible wisdom of the ancient Indians. They had the scientific knowledge of observing astronomy very early, which made the observatory quite famous. You can see the two sundials with a history of nearly 300 years that are used to measure time in two circles. The twelve triangular small buildings in the courtyard represent the twelve constellations. The angle and direction of each constellation are towards their respective constellations. They are very accurate and scientific and still used to study astrology.

Derivation and meaning of the name

The Jantar Manta Observatory was constructed during the reign of Sawai Jay Singh II. It's started in 1728 and completed in 1738. The observatory shows Indians' knowledge about the universe and their capability to explore astronomy at the terminal stage of the Mughal dynasty. The observatory is a masonry structure, while the astronomical instruments are made of masonry and bronze. The principles of these astronomical observation instruments are derived from ancient Indian Sanskrit texts, supplemented by Islamic astronomical data obtained during the Mughal period. People can observe the position of stars with the naked eye though these astronomical instruments. On the one hand, the observatory has innovations in architectural craftsmanship; on the other hand, it was inspired by different religious and social ideas in India in the 18th century. The observatory is a typical representative of Ptolemaic positional astronomy, which was shared by many civilizations.

The observatory once was deteriorated in the 19th century. Arthur Garrett, an army major and astronomy lover, was an assistant engineer in the Jaipur region. He presided over the initial maintenance of the observatory during his tenure. Jantar Mantar in Jaipur was included in the "World Heritage List" as a cultural heritage site at the 34th UNESCO World Heritage Committee meeting.

Now, Jantar Mantar has become one of the most famous scenic spots in Jaipur.

Vrihat Smarat Yantra is the largest sundial in the world, with a 22.6-meter high gnomon arm and a 15.5-meter long quadrants radius. Local time is provided by Vrihat Smarat Yantra; what interesting is that it's accurate within 2 seconds.

The small samrat yantra is a sundial that can give the time to an accuracy of 20 seconds.

Jantar Mantar in Jaipur is a large scale place. We highly recommend you hire a guide who can explain the significance of each instrument to you. If you need a professional tour guide to Jantar Mantar, please feel free to contact Top Asia Tour.