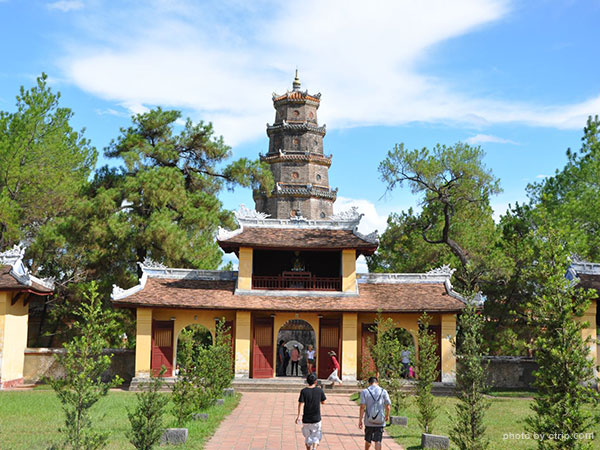 Thien Mu Pagoda is located on the bank of Perfume River in the western suburb of Hue City, 5 kilometers from the Hue City. Thien Mu Pagoda is the oldest temple in Hue city, also known as Chùa Thiên Mụ or Linh Mụ Pagoda. Built on the site of an ancient Cham Tower complex, it has a history of more than 400 years and is now a relic of the protection of the United Nations Cultural Heritage.

Thien Mu Pagoda was built in the second year of the Le Dynasty (AD 1601) by Nguyen Hoang, governor of Thuan Hoa province. The temple has been destroyed and rebuilt several times over the centuries. It was first repaired in 1665, and in 1710 a large clock weighing 3285 kg was added in pagoda. After the expansion in 1714, it has 10 more magnificent buildings including the heavenly king’s hall, the Jade Emperor hall, the Ten Kings Hall, halls for preaching dharma, towers for storing sutras, bell towers, drum towers, meditation halls, etc. The most recent damage caused during the French and American wars in Vietnam and It was repaired in 1975. 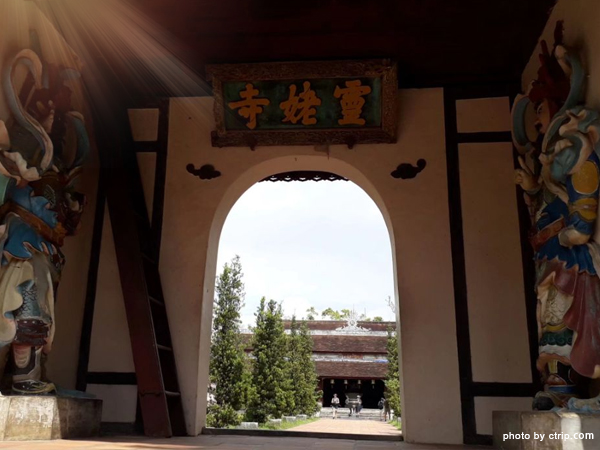 Thien Mu Pagoda is settled in Ha Khe Hill, in the village of Huong Long. Thien Mu Pagoda is an ancient palace-style building. Inside, you will find attractive buildings such as the Bell Tower, Drum Tower, the Great Buddha's Hall, and Heavenly Kings Hall. The Temple of Heaven also has a sacred monument. There are more than 40 pavilions and quiet rooms in the temple, which can be used for tourists to stay in the house or for a brief Kiyonaga.

Phuoc Duyen Tower was bult in 1844 by emperor Thieu Tri, which was originally named Tu Nhan Tower. It is an octagonal shape seven-story pagoda, each of which is dedicated to a different incarnation of buddha statue. The tower is 21 meters high and can be visible from the Perfume river. Phuoc Duyen Tower is regarded as the most prominent single structure in Thien Mu Pagoda and is also the main symbolic of Thien Mu Pagoda. Inside the tower a spiral staircase leads to the top storey where is enshrined with a gold-plated laughing Buddha. Outside the pagoda there are six statues of patron saints defending the pagoda. Phuoc Duyen Tower has become the unofficial symbol of Hue city.

The Great Buddha's Hall is a place where the monks and pilgrimages concentrate on practice. The Buddha statue of sakyamuni Buddha is enshrined in the hall. There are eighteen Arhat statues on both sides of the main hall. It is said that before Buddha nirvana, he instructed 16 arhats not to nirvana, but to live in the world to cultivate blessings for all beings.

Surprisingly, the strangest thing is that there is a derelict old car in the temple. It was originally the car of the 1953 temple abbot, Thich Quang Duc, who protested against the government’s suppression of Buddhism and went to Saigon (now Ho Chi Minh City) to set fire to self-immolation. The event at that time successfully attracted international attention. 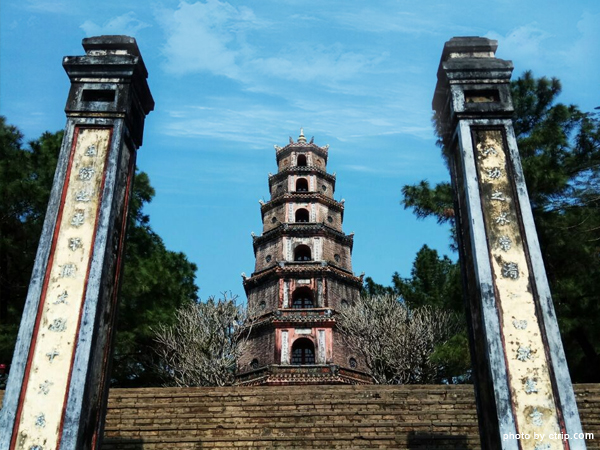 In addition, Thien Mu Pagoda has a giant bronze bell called Dai Hong Chung that was cast in 1710, weighing 2052 kilograms. It was recognized as one of the most significant cultural relics of its time in Vietnam. It is said that the bell tone can be heard six miles away.

A stone monument set on the back of a huge marble turtle, about 2.5 meters high. The stele was carved in 1715, which records the contribution of Thien Mu Pagoda to the promotion of Vietnamese Buddhism.

How to Get to Thien Mu Pagoda 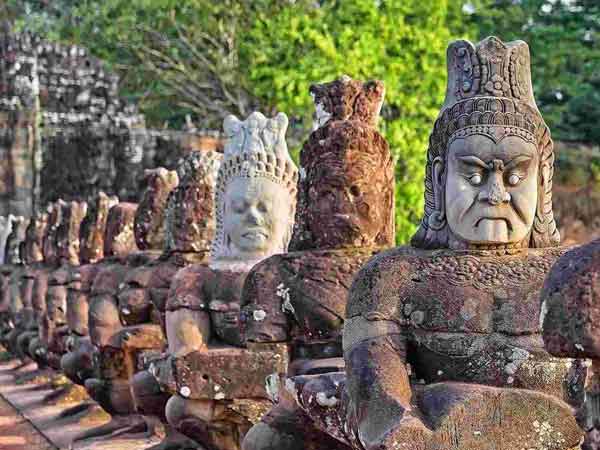 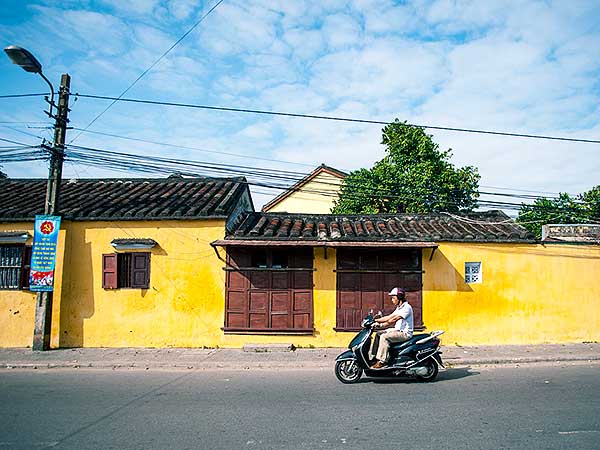