Food is the highlight of Guilin's tour. Guilin Rice Noodle is a must-eat food because it represents the eating culture of Guilin. What's more? There are 9 best options in Guilin you must give it a shot. 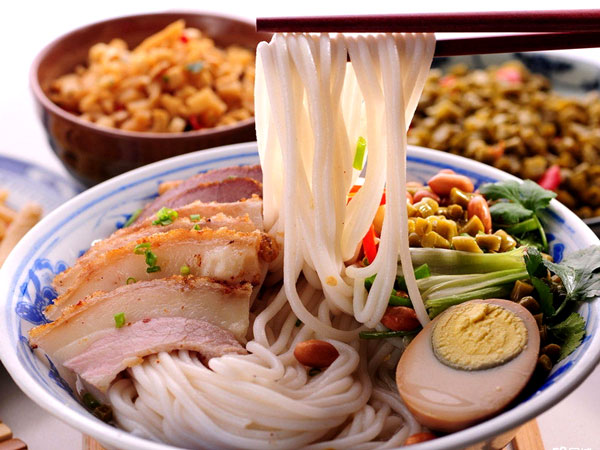 Guilin Rice Noodle is a traditional dish with a long history in Guilin, Guangxi. Known for its unique flavor, the workmanship is exquisite. The most elaborate production is the brine production, the process varies from person to person, and is roughly cooked with pork, beef bone, momordica grosvenori, and various seasonings. The content and method of making brine are different, therefore, the flavor of the rice noodle are not the same. Guilin Rice Noodles can be either round or flat - the round rice noodles called 'mifen(米粉)', and the flat rice noodles called 'qiefen(切粉)'. The round one is more suitable to eat without soup while the flat one can be tasted together with the delicious broth. The one without soup called 'lucai(卤菜)', and the one served with soup called 'tangcai(汤菜)'. For a bit of spice, pepper oil or chilli flakes can be added. These popular noodles can easily be found at numerous eateries in and around Guilin. 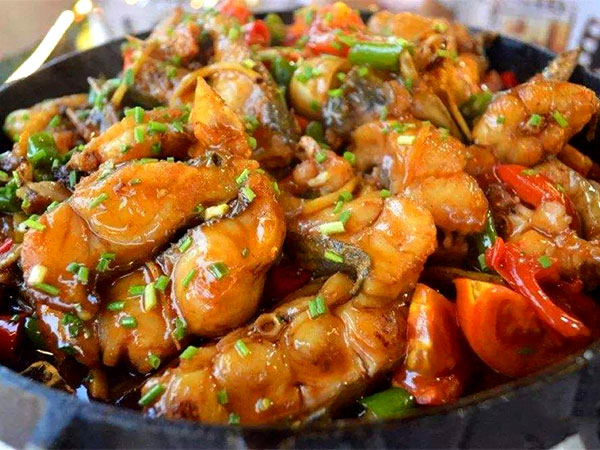 Yangshuo is in the region of Guilin. Yangshuo Beer Fish is Guilin's most famous dish. It is made from fresh caught Li River carp. The fresh fish is fried in a wok along with beer, hot and green peppers, garlic, onions, celery, tomatoes, soy, and sugar. The fish is extremely spicy and delicious without fishy smell. People who eat beer fish first time will be amazed at the crispy fish skin. The meat is so tender and the meat will melt in your mouth wonderfully. 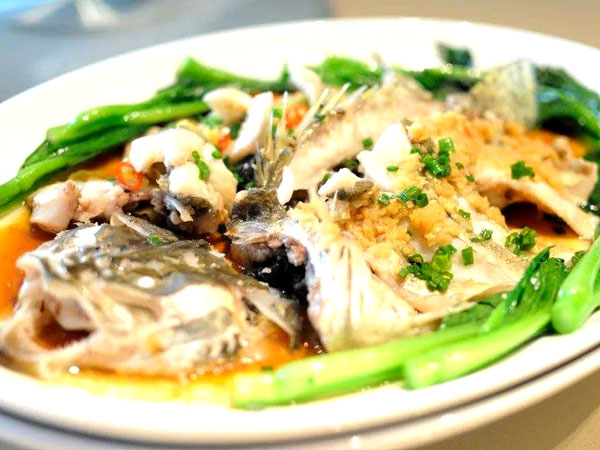 The main ingredient of this dish is the mandarin fish from the Li River, mother river of Guilin city. The taste is savory, soft, and tender. Steaming the mandarin fish and shredded fish meat, adding some shredded ginger, green onions, sesame oil and other ingredients, and you will have a refreshing dish just in front of you. 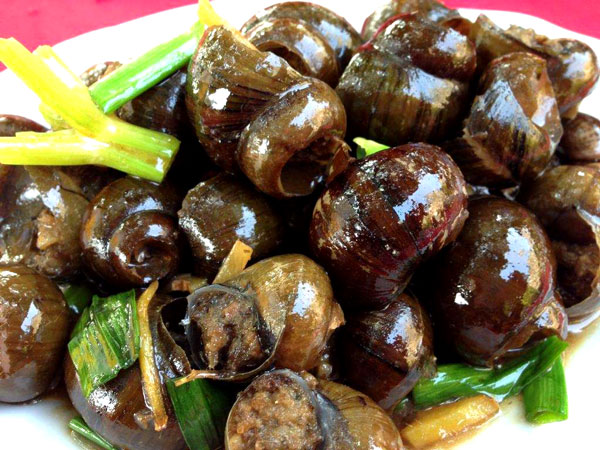 The beautiful Li River is rich in snails, and the snails nourished by Li River are especially big and meaty. When making this dish, add the local sour pepper to spice up the taste, and add some onion, ginger, and Sanhua Liquor to remove the smell. The dish is so colorful, aromatic, and tasty. When eating River Snail, uncover the top cover of River Snail and use your mouth to force the meat to get out. It tastes spicy and fresh, especially appetizing. You can find this unique Guilin dish no matter in high and low-end restaurants. Guilin's River Snail is also an important side dish in many dishes. Also, it has become an indispensable appetizer for Guilin tourism. 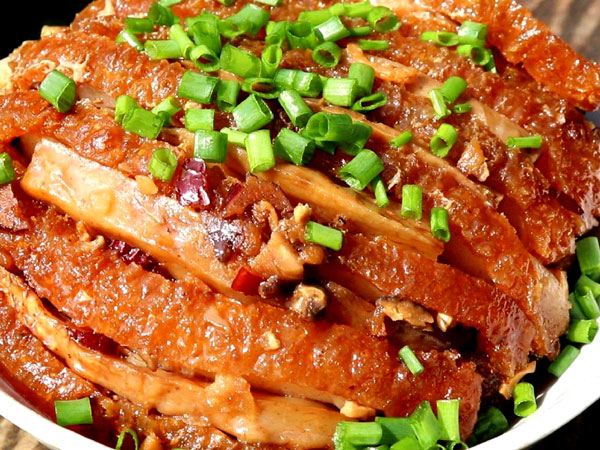 With the best taro that picked up in Lipu County (104 km south of Guilin), Lipu Taro Looped Meat is a famous traditional dish of Guilin. It is always served in a traditional Guilin banquet during the festivals and normal occasions such as weddings. Lipu Taro Looped Meat is a famous dish in Guilin. This dish is golden in color, and the loin flakes are soft and refreshing, oily but not greasy, and full of fragrance. It has the benefit of clearing away phlegm and moisturizing skin. 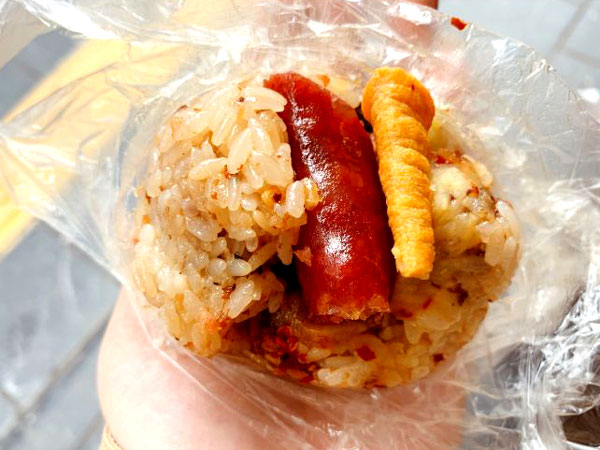 The breakfast for local Guilin is either Guilin Rice Noodles or Guililn Sticky Rice. The popularity of sticky rice in Guilin is unquestionable. Sometimes a queue for sticky rice is so long. Steamed sticky rice is placed in a large pot, with pickled radish, pickled cowpea, bean mash, sausages, chili sauce, and other ingredients placed next to it. The stall owner first puts the plastic bag in a small bowl and then fill a half bowl with sticky rice, then add the ingredients in turn, finally put a layer of sticky rice on the top. Such a soft and delicious sticky rice is made within 10 seconds due to the skillfulness of a stall owner. The price ranges from 3 RMB to 5 RMB. 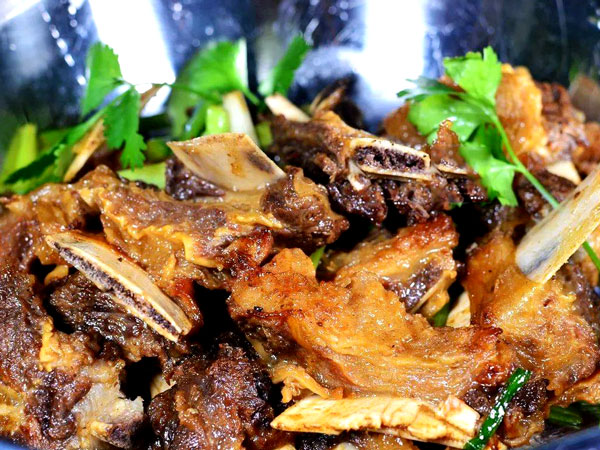 Girdle Cooked Beef Steak (Niupai ganguo) is one of the most well known local dishes in Guilin. This kind of beef steak is cooked with different seasonings, such as chili, cassia bark, and fennel. It is similar to eating hot pot, except no broth is used in the wok. You can control the heat to cook the meat to your specifications. The griddle cooked beef steak tastes spicy, and its flavor is unique. It is very different from that of a Western steak. Also, diners can add some beer to the wok to make the steak even tastier. After the steak is finished, vegetables, bean curd, pickled cabbage, noodles and a bowl of broth can be added to the wok and cooked in the steak's juices. This delicious dish can be found at most of hot pot restaurants in Guilin and Yangshuo. 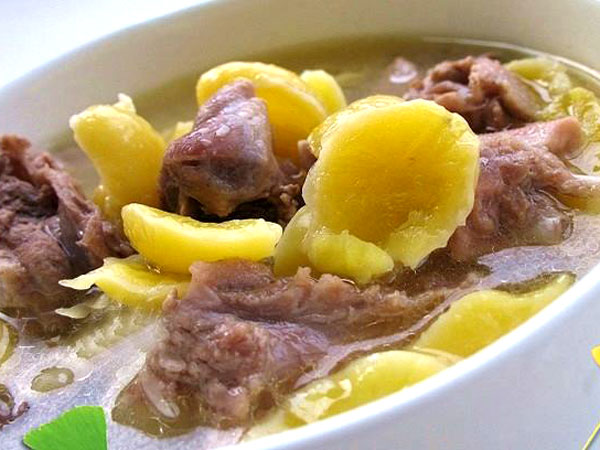 This is a traditional nourishing dish in Guilin. It uses Guilin specialty ginkgo, old duck, sliced ham, and various ingredients. It is steamed in a stew pot. It is characterized by fresh flavor of duck meat, smooth and tender ginkgo. It has the functions of nourishing body, moistening lung and replenishing vital energy. 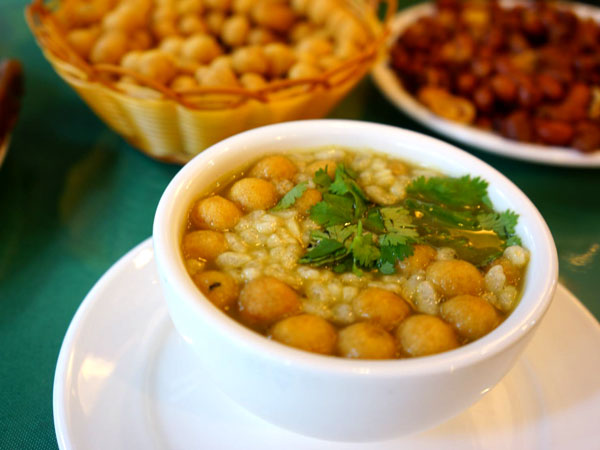 Yangshuo is in the region of Guilin. The method of making Oil Tea is based on old black tea. It is fried with oil to slightly coke it and make it fragrant. Add salt to boil and add more ginger to cook. The taste is strong and bitter. Put some drunken peanut powder, the taste is mellower and less bitter,  Gongcheng Oil Tea is recognized as the top of the local oil tea, and is well-known throughout the world. Oil Tea suits all seasons and all meals. Gongcheng is now rated as the hometown of longevity in China, and the secret of longevity has a great relation with oil tea. You must have a try. 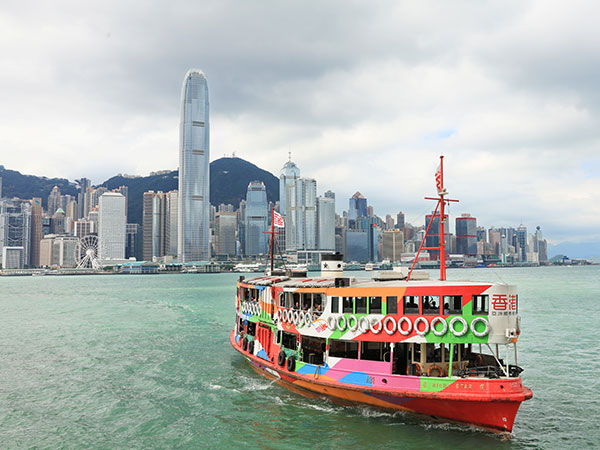