Nanjing Road is the earliest commercial street after Shanghai opened as a treaty port. With a total length of 5.5 kilometers, Nanjing Road starts with the Bund in the east and ends with Yanan West Road in the west. It is divided by Central Tibet Road to the east and west sections, which is across Jingan district and Huangpu district. As a world-famous pedestrian, Nanjing Road is well-known as "the paradise for shoppers". 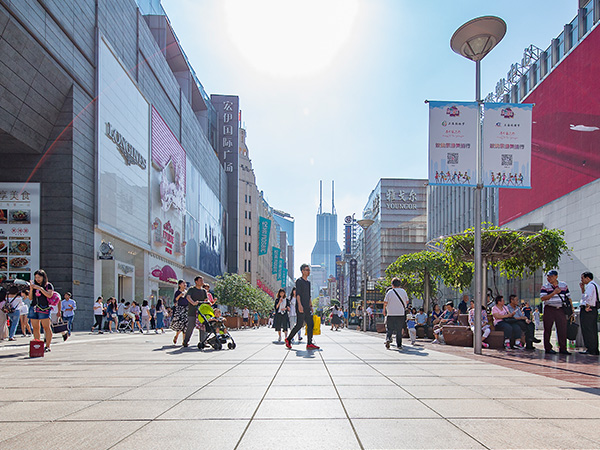 Shanghai was opened as a treaty port in 1843, which attracted lots of western merchants and adventurers. In order to enrich their life in China, they built a garden in Nanjing Road and established the first horse racing path surrounding the garden. Nanjing Road was called "Park Land" at that time. The horse racing activities brought large crowds and merchants. Many shops emerged along roadways and the commercial atmosphere continues up to now.

The Structure of Nanjing Road 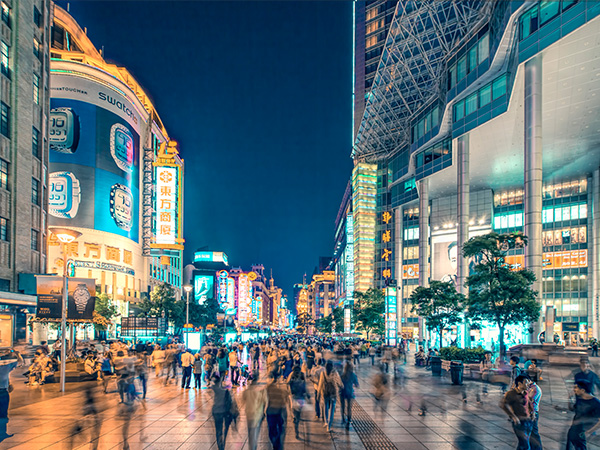 Nanjing Road is paved by colored bricks, which symbolizes wealth and prosperity. Integrating sightseeing, catering, shopping and leisure, Nanjing Road meets all requirements of visitors. The pedestrian street is located in the golden section of Nanjing Road. On both ends of the west and east, there is a red marble with the inscription "Pedestrian Street of Nanjing Road" by Jiang Zemin. In the middle section of pedestrian street, there is a century square covering the area of 8,370 square meters. People also can enjoy the music fountain here.

Nanjing Road is divided into three distinctive sections under the uniform theme "forever Nanjing Road". The section called "the legend on the sea" is from the Bund to Central Henan Road, which shows the basic styles of romance, elegance and nostalgia. Nostalgic jazz music comes from the coffee shop of Peace Hotel. The fashionable open-air bars and the abstract statues stand on Nanjing Road. From the sharp contrast of the history and the modern, visitors can enjoy the charm of Nanjing Road. 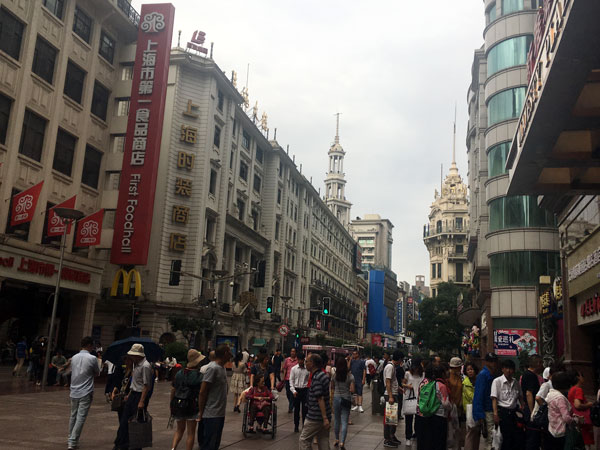 Jingan Temple is one of the famous ancient temples in Shanghai, which is located in No. 1686, Nanjing West Road. It was built in 274 on the bank of Wusong River and moved to Nanjing West Road in 1216. It has a longer history than Shanghai city. After the reconstruction and extension in 1997, Jingan Temple formed a layout of "temple in the front and tower in the back" with a total constructive area of 220,000 square meters. And for now, Jingan Temple commercial area has become one of the most important business centers in Shanghai.

Peace Hotel was built in 1929 and formerly named as Cathay Hotel. It was designed by Palmer& Turner as a gothic building of the Chicago school. There was a large-scale renovation in 1999 and officially listed as a  5-star hotel on May 19th, 2000. With the main building of 11 floors and the south building of 6 floors, there are 273 suites in total. The distinguishing feature of the Peace Hotel is the green roof with copper sheath. The exterior walls are covered by granites. When you enter through the revolving door, you will see an elegant copper chandelier with ornamental engraving hanging in the hall. The lobby ground is covered by milky Italian marbles. With the magnificent design and splendid decoration, Peace Hotel is well known as "The first building in the far east". The south building of Peace Hotel was Huizhong Hotel. It was completed in 1908 with Renaissance style. Peace Hotel is a landmark building in Shanghai with a golden location in Nanjing Road. You will pass by Peace Hotel if you walk along Nanjing Road to the Bund. Standing on the top of Peace Hotel, you can overlook the night view of the Bund at 360 degrees. 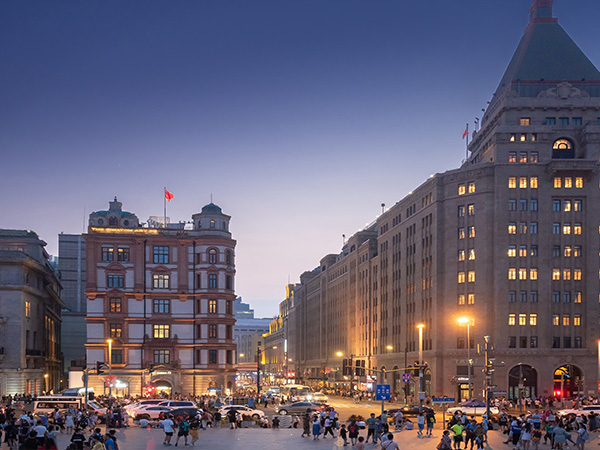 Paramount Hall was built in 1929 by a Chinese merchant Gu Liancheng. As a famous comprehensive entertainment place in Shanghai, Paramount Hall was called "the first official entertainment place in the east". There are three floors. The first floor is the kitchen and storefront; the second floor is the dancing hall and the banquet hall; the third floor is the hotel. Paramount Hall stands among many skyscrapers, which adds a cultural atmosphere to this modern city. It is full of an air of mystery old Shanghai with cheongsam, jazz music, rickshaw, and so on, which makes you travel back to 70 years ago.

You can visit Nanjing Road all the year around, but it will be very busy and crowded on weekends and public holidays.

How to Get to Nanjing Road

• Nanjing Road is located in the city center. It's very convenient to take a taxi to get there.

• There will be traffic control in the public holidays, so please make a plan in advance if you want to visit Nanjing Road in the busy days.

Planning a sightseeing tour to Shanghai? Here are some tour packages for your references:

Feel free to contact us for your Shanghai travel plan, we're glad to help you. You can also tailor-made your own Shanghai tour at Free Online Tailor-made Tour to create your unique Shanghai tour.